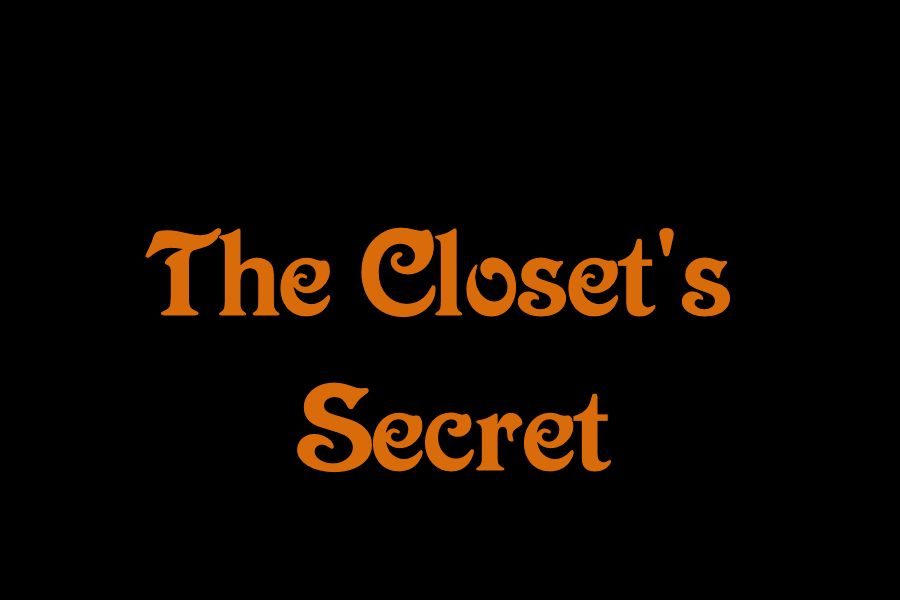 The Closet’s Secret by AJ Grassi

By AJ Grassi, Editor in Chief

He smashed into the doorway, face to frame, as he sprinted up the hall.

“Frack!” he yelped as he sprung off the floor. He went to take off again, but was quickly stopped by his grandfather–his angry and pissed off grandfather.

“Jonas,” his pap said sternly, “Why were you near my closet?”

“Curious? How many times have I told you to stay away from my closet?”

Jonas didn’t answer, he knew what he was supposed to be doing: shining the shoes and checking the inventory list, not trying to make another attempt to see what was in his grandfather’s closet. It was always locked, so he never knew why he bothered with it. Just the thought of not knowing what was in there was enough to pique his interests. He hadn’t thought much longer until he felt a firm smack against the back of his head.

“Get movin! Get your rear end back down to the shop or I’ll redden your ass!” his grandfather snapped, “And don’t forget to shine my oxfords!” He belted him again with the newspaper he was holding and threw it at him. With a quick nod and a routine “yes sir”, Jonas shuffled away rubbing the back of his throbbing head.

His grandfather stormed off down the hall and into his bedroom. Jonas bent down and picked up the paper on his way back downstairs. The headline read: Ku Klux Klan Suspected in Lynching – Police are Looking to Make Arrests. The picture didn’t show much detail, which Jonas didn’t mind. He hated seeing the lynched victims pictures. They were common around town, but their mutilated bodies made him shudder every time.

The shoe shop was vacant, as it usually was. The door, a large hunk of locust, stood sentry for the shop protecting all of the “valuable” merchandise. The shoe shelves always looked as if they were ready to tip over from the weight of constantly bearing objects that were rarely ever shoes. Towards the back of the floor was the inventory closet, not much bigger than a farmhouse bedroom. Jonas liked to call this his office, only because he was always in it. Boxes filled with leather polish and crates that held old awls, bristles and mallets lined the walls. Out on the stool where Jonas sat and worked were his grandfathers oxfords.

He again started to polish away on the shoes, a pair of Jarman brown leather, wingtip oxfords to be exact. Size eleven and a half. He couldn’t remember how many times he had shined these damn things over the years, but he knew it was enough that it should be impossible for them to get scuffed up. Jonas could hear his grandfather shuffling around in his bedroom upstairs, most likely organizing his wardrobe. He scrubbed away on his shoes making sure to do up the sides and the back. He treated the bottoms and wicked the laces like he always does.

When he reached behind himself to grab a bristle brush he dropped one of the shoes. However, something caught his eye about the shoe. The wedge on the right shoe looked like it was loose. He began to feel flushed. If he messed up his grandfather’s favorite pair of shoes, he wouldn’t live to see the light of tomorrow. Jonas gently plucked the shoe off the floor and examined its heel. He didn’t want to even look at for he feared he would ruin it. He slightly nudged the wedge back to the rightful position and it clicked tight. A feeling of relief swept over Jonas, but something didn’t fit quite right. The wedge to the shoe shouldn’t have been loose at all. The wedges to his grandfather’s oxfords were glued and tacked to the sole of the shoe, or at least were supposed to be.

He paused and listened. The shop was silent. It was so quiet he could’ve heard a pin drop, or his grandfather if he was near. Jonas studied the heel and looked it over. He grabbed the wedge of the shoe and tried twisting it. It didn’t budge. He looked it over some more, but this time more carefully, not to miss a single minute detail. He noticed the edge along the top part of the heel didn’t seem like it was quite snug along the sole.

Instead of twisting the bottom of the shoe, he gave it a little pull. To his surprise, it popped out. He twisted it once again and this time, the wedge opened up to reveal a small slot underneath the shoe. Jonas peeled the key out from its mold and looked it over in the palm of his hand. It was a small brass key, very ornate in nature. The patina gave away the keys age, shown from its constant use.

A very abrupt voice called Jonas’s name. His grandfather had made his way down to the shop without making himself known. He stuffed the key in his pocket and fiddled with the shoe to put it back together. He jarred it shut just as his grandpa turned into the closet.

“Have you finished my shoes yet?”

“Well get ‘em done. I need them tonight.”

“Are you alright son? You look pale.”

“I’m okay pap,” Jonas pressed his hand firmly against his pocket without looking up to meet his grandfather’s gaze.

His grandfather stared him down for another few seconds and left, keeping his eyes on Jonas. He sat back down and put the final touches on the shoes and set them on the counter for his grandpa. Jonas closed the door to his closet and took himself along with the key up to his room where he would sit for the night and wonder about what new doors he could open.
Jonas laid on his mattress and peered at the key which he had set on his pillow. It was getting late in the evening and Jonas was trying to fight off sleep. He heard his grandfather coming and put the key under his pillow.

“Jonas,” his grandfather said as he opened the door, “I’m heading out, got some errands to run, I’ll be back later tonight. You better not go anywhere, understand?”

“Good. Night Jonas.” He gave a half-hearted smile and closed the door.

Jonas waited until he heard the hum of his grandpa’s car leave the alleyway and he reached under his pillow and pulled the key back out. He twiddled it through his fingers and got out of bed. There were a few places throughout the house he wanted to see if the key fit.

He walked down the hall past his grandfather’s closet and downstairs to the shop. He tried all of the old locks he could find. He tried the key in every case, shelf, and cupboard within reach. He hoped maybe he could find himself a pair of vintage shoes or even some forgotten loose change. He swept through the whole shop and couldn’t unlock a single thing. Jonas went back upstairs, past his grandfather’s closet, his room, his grandfather’s room and to the end of the hall. There was an extra room off the end of the hall where his pap would put old store items and working materials that he thought might be “of use” someday. Jonas searched high and low in the dusty and cobweb filled storage room and didn’t find anything that needed unlocked. It has been sometime since he had started his hunt and he had no time frame of when his grandfather would get back.

Jonas thought of giving up and going to bed but as he left the storage room he could see the door to his grandfather’s closet. He had purposely ignored it, he didn’t want to get caught anywhere near that thing. Although he knew the consequences, it was the only place in the house that was locked. He thought if he could just try the key to see if it opened the door, he would relock it and leave it be. Jonas took slow leaps down the hall until he stood in front of the towering door. He picked up the key and looked at the key slot and figured, what has he got lose.

He thrust the key into the opening and slowly began turning it. He had cranked it halfway around and then it gave, a latch became undone and the door drifted open, just enough that it was almost inviting Jonas to come take a peek. He ever so timidly grabbed the hunk of maple and jarred it open. . The door revealed something of wonder and confusion.

Pictures lined the walls like a shrine and the few shelves that were mounted in the closet had piles of ropes and other odd ends thrown on them. There was a skinny pole up towards the top of the closet and a wire coat hanger dangling from it. There wasn’t a lot going on in there and Jonas wasn’t exactly sure why his grandfather made such a big fuss over the old space. As he shut the door one of the pictures fell off the wall and he caught it in his hand. He looked at it as he laid it back on the shelf and he froze. He took a closer look at the picture and dropped it where he stood. He ran and fumbled down the stairs to his closet and flung the door open. He grabbed the newspaper from that day off the floor and took it back upstairs. Side by side, he picked up the picture once more and looked at it with the paper.

The picture that fell out of the closet was the same as the one of the black man lynched in the paper. Jonas felt as if he was outside in the freezing rain without any clothes on, his whole body numb.

He looked up the walls of the closet, glancing over the rest of the pictures. Each one, a different man hanging from a tree or a light pole, lynched and bloody from torment. In each picture was a man in a long white gown. They wore tall, pointed, white faced masks covering their heads. Gears ground to a halt in Jonas’s mind as he began to realize–

His body already numb, became stiff, almost as if he were dead. He turned to face that familiar voice at the top of the stairs. His grandfather was standing there in a bleached white gown, with a tapered hood draped over his head. He clenched a coil of thick nylon rope, blood clung to the bottom of the gown. His body shook from rage.

“Well Jonas,” he gritted through his teeth, “it looks like you and I get to have a little… chat.”