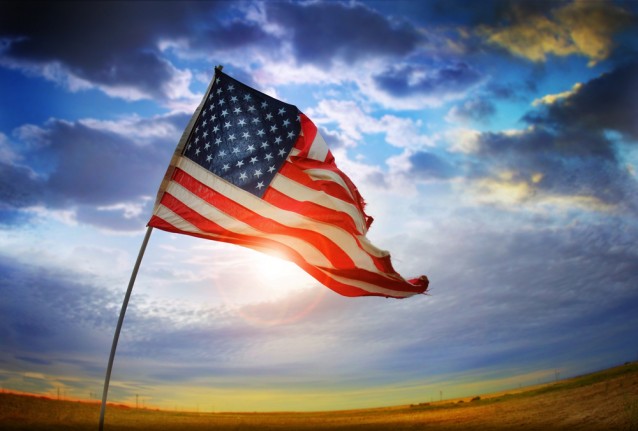 Pledge or Anthem: Do We Have A Right To Deny Them?

Two freshman at Tyrone decided to take a stand on their beliefs about patriotism. Below, Ben Delbaggio and Anna Lynn Fryer talk about issues important to them, regarding the Pledge of Allegiance and the National Anthem.

Now some people may not realize the title of this editorial is a quote from the Pledge of Allegiance. If you did realize it, you will see that the words “under god” are not present. Why did I do that you ask? This is how the pledge originally was and should have still been. The words “under god” were never meant to be in the Pledge of Allegiance, and its existence goes against the beliefs of atheistic citizens and is unconstitutional.

First of all, to understand the scope of why adding “under god” to the Pledge of Allegiance was unconstitutional, we must look at the first amendment, more specifically the “Establishment Clause”.

The Clause states the following;

“Congress shall make no law respecting an establishment of religion, or prohibiting the free exercise thereof.”

The importance here is that Congress can make no law respecting an establishment of religion, as in they cannot make any laws promoting or obstructing religious beliefs. Using “under god” in the pledge of allegiance symbolizes the nation recognizes the existence of an omniscient being by stating the nation is “under god.” This almost directly obstructs the religious belief of atheistic citizens as it goes against their belief that there is no omniscient being.

Why do we have a Pledge that can attract negative attention to someone if they refrain from stating it, yet by doing so they are forced to state they believe in a god?”

Now some people may say this does not matter, as the pledge of allegiance is not mandatory to be said, so they can simply not say it. Although that may be true, it still matters according to the Supreme Court.

In the case of Engel v. Vitale in 1962, the subject of prayer in school was addressed: “…government-written prayers were not to be recited in public schools and were a violation of the U.S. Constitution and the Establishment Clause of the first amendment. This was decided in a vote of 6-1… The Court rejected the defendant’s arguments that people are not asked to respect any specific established religion; and that the prayer is voluntary. The Court held that the mere promotion of a religion is sufficient to establish a violation, even if that promotion is not coercive. The Court further held the fact that the prayer is vaguely worded enough not to promote any particular religion is not a sufficient defense, as it still promotes a family of religions (those that recognize an “Almighty God”), which still violates the Establishment Clause.”

As you can see, our judicial body of our great nation has ruled that even voluntary activities can violate the Establishment Clause if it promotes the belief of a “God”.

Now if you change the words from prayer to Pledge of Allegiance, you would see it falls under the same category as the prayers in terms of recognizing a supreme being and being voluntary. The question now remains, why do we have something that even the Supreme Court, the greatest judicial body in our great nation, indirectly ruled unconstitutional?

Some people believe the fact that “under god” in the Pledge of Allegiance is no big deal, and it offends such a small percentage of the population that it doesn’t matter. According to a news article from Vox based on the findings of psychologists Will Gervais and Maxine Najle, though, results show that there may be more atheists in the country than believed. The results of surveys they designed to reveal “hidden” atheists (People hesitant to make their beliefs public), estimate 26% of Americans do not believe in god, and that 1 in 3 atheists in the country does not feel comfortable disclosing their belief. If their findings are accurate, that means approximately 84,682,000 Americans are Atheists, and 1/3rd of them are unwilling to disclose their belief in fear of attracting negative stereotypes associated with Atheism.

Why do we have a Pledge that can attract negative attention to someone if they refrain from stating it, yet by doing so they are forced to state they believe in a god?

Atheistic citizens around the nation, and especially students, are faced with a choice: say a pledge that goes against beliefs, or be socially ostracized from society on the grounds of not being “patriotic”.

“You Don’t Deserve Your Seat”

If you’re disgraceful like 23% of the NFL players, and countless other Americans, you either sit or support sitting during the Pledge of Allegiance or National Anthem.

Not only are you disrespecting our country, but our veterans as well.

“We lined ‘em up and shot ‘em. Every day. And I’d do it again for this country, and I’d do it again if it would fix the way things were now.” Those are the exact words my grandfather told me when he finally opened up after decades of his service in Vietnam.

I don’t care what your excuse is: When you sit or take a knee my grandfather is personally attacked by your actions. But, here are probably the best excuses you can come up for not saying the pledge while sitting on your backside.

“But, the Pledge doesn’t apply to me. It was written over a hundred years ago, and it was mainly for white men!”

If you believe this still, where have you been over the past few decades? Whether you’re black, white, atheist, Christian, gay, straight, male, female, transgender, or non-conforming, we have passed so many laws and acts so that you can be included in this country.

We have taught our children different views than we might have grown up believing. Times change, and with that so do people. So, maybe you should become a part of that change and realize the Pledge unites us. All of us. Otherwise, you’re seen as being just as selfish as a spoiled kid who was offered a slice of cake instead of a gumdrop because he didn’t get to choose what he wanted.

“There is too many police brutality and other racist acts for me to believe that Pledge.”

Have you TRIED to make a difference?

“Yeah, sitting down gets out my voice.” True, but it just gets lost in a sea of other different voices.

If what you want is change, why don’t you BE the change? If you believe there is too much police brutality then join the forces?

According to the FBI, “The rate of sworn officers was 2.4 per 1,000 inhabitants in the nation in 2011.” Increase that number of people sworn in, if your intentions are good, then not only will you help end police brutality and bring faith in our police back, but there will be more people upholding the law, and keeping others safe.

Before you take a knee and look at the ground, or sit down and gawk at those “foolish enough” to support something that doesn’t mean anything to you, take a good look at the history of America, and think: we live in an amazing country.”

Get off that chair and do something with your life. Our veterans sure did, and the only reason your ass is here is all thanks to them.

“You’re just upset because your grandfather was a soldier. None of my family has gone into the service, so no one has done anything for me.”

That is such a lie that even the Devil would be ashamed of you. Yes, this subject does hit me more personally than others, but for good reason.

My grandfather, and countless other people who have gone into the service, not just for their families, but for other families, for America, and for America’s future. Yet, you thank them with your horrific behavior and self-centered beliefs.

Before you take a knee and look at the ground, or sit down and gawk at those “foolish enough” to support something that doesn’t mean anything to you, take a good look at the history of America, and think: we live in an amazing country.

Yet, you make it seem as if America is something you’d write on a dunce cap. Have you ever thought, maybe you’re the one wearing the cap?