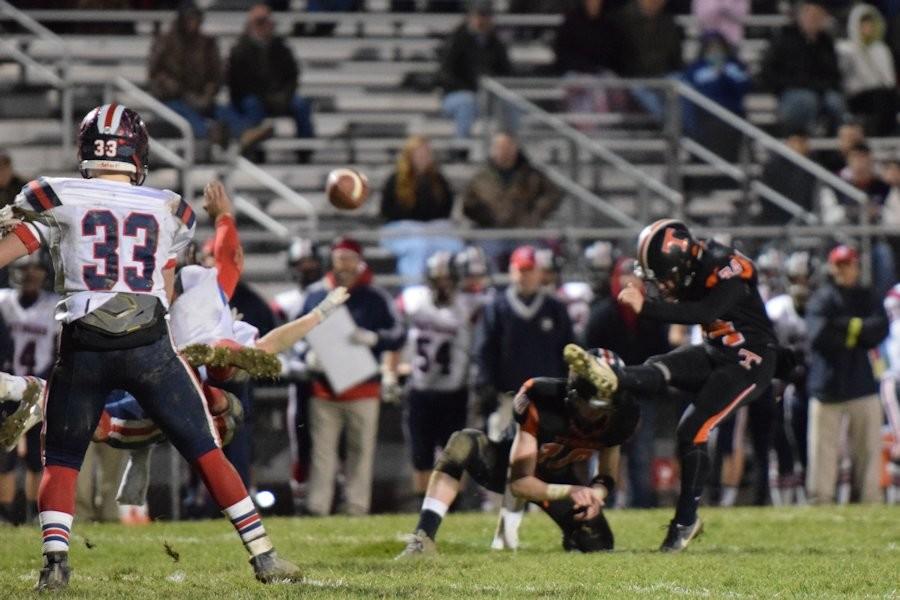 By Adam Zook, Editor in Chief

With only 29 seconds left in a tie game Tyrone’s sophomore placekicker Ethan Vipond ran on to the field with an opportunity that most kickers can only dream about.

With less than ideal field conditions and a steady wind, Vipond lined up for a 29 yard game winning attempt. Few would have guessed it was only his third field goal attempt of the season as Vipond channeled his inner Adam Vinatieri and came up clutch, splitting the uprights for a heart pounding 24-21 Tyrone win.

“I knew I had to make it for the seniors, I couldn’t let them down,” said Vipond.

As the team mobbed their kicker, the Tyrone fan base jumped for joy in what was arguably the most exciting game in recent memory.

Unlike their first meeting of the season in which Tyrone dominated the Bearcats 42-27 with a potent passing attack, this game was a back and forth battle during which the wind and poor field conditions kept most of the action on the ground.

“We didn’t play our best game by any means,” said Tyrone Head Coach Jason Wilson, “We have plenty of things to work on from both sides of the ball, but a win is a win none the less.”

The Bearcat running attack of Jon Wagner, Ian Border and quarterback Speck was effective against the normally stout Tyrone defense, amassing 258 yards rushing on the evening.

Tyrone’s Gary Weaver was equally effective on his own with 242 yards and three touchdowns, including a 61 yard touchdown run on the Eagle’s first play from scrimmage.

The Golden Eagle offensive line was able to win the battle for most of the evening, allowing Weaver to break into the second level of Huntingdon’s defense.

Both teams struggled in the passing game, combining for only nine completions and 160 yards passing.

Tyrone only completed two passes on the night, but quarterback Drew Hunter made one of them count on a key 39 yard strike from to Cullen Raftery on the Eagle’s final drive, leading to Vipond’s game winning field goal.

Tyrone will face Juniata this Saturday at 7:00 at Gray Vets Field in an attempt to advance to the District 6 Championship Game. The Indians defeated Southern Huntingdon in impressive fashion on Saturday to the tune of a 42-0 blowout.

On the other side of the bracket, Central and Ligonier Valley both came away with wins and will play Friday in a rematch from the last week of the regular season.