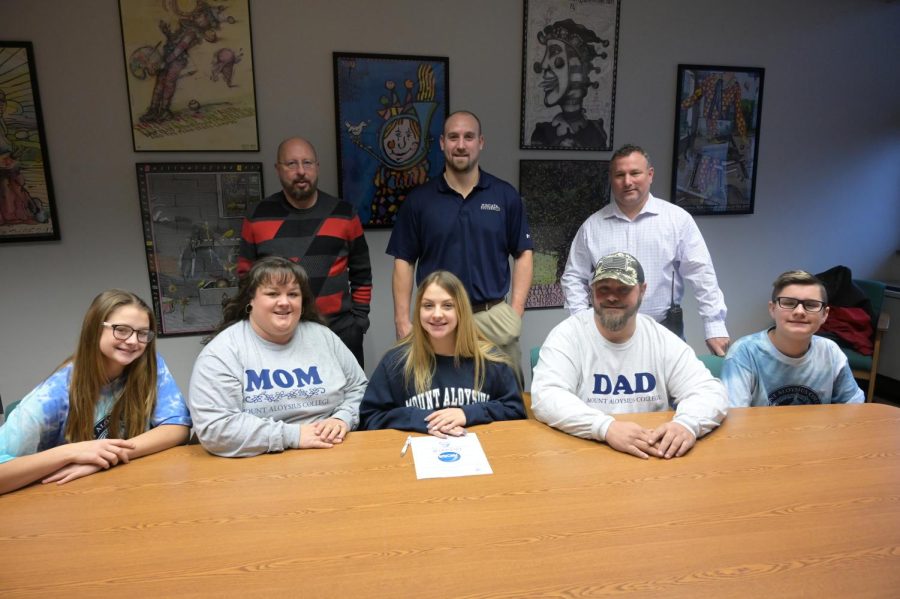 Tyrone senior Maecy Tuskovich plans to continue her academic and athletic career at Mount Aloysius College in Cresson in the fall, where she will be a member of the Mounties women’s volleyball team.

Tuskovich has been playing volleyball for seven years. She was a starter and multi-season letter winner at libero/defensive specialist for the Lady Eagles.

“Volleyball is special to me because it is a way for me to escape reality,” said Tuskovich, ”I’m looking forward to playing at a higher level while continuing my education.”

Tuskovich considered other schools, but Mount Aloysius was ultimately the best fit for her.

“I chose Mount Aloysius because they have a great nursing program, smaller class sizes, and an amazing environment,” said Tuskovich.

Her favorite memory from high school volleyball was when the Lady Eagles beat Cambria Heights in the district quarterfinals during her sophomore year, the program’s history.

Tuskovich was also a leader on the team, always there to help the younger players, including her younger sister Tiffanie, who Meacy was able to play with for the past two seasons.

“Maecy came up to me in practice and always told me to pick my head up and that I would get it next time. She told me this almost every practice, and she always kept me motivated to keep trying,” said sophomore Tiffanie Tuskovich.

Tuskovich hopes to play libero for the Mounties.

The Mounties compete in NCAA Division III and are a part of the Allegheny Mountain Collegiate Conference, a 13 member conference that includes Penn State Altoona, Penn State Erie, Pitt Bradford, and Pitt Greensburg.

The Mounties finished the 2021 season with a 4-17 record. They will look to rebound next year with a young group returning, including Tuskovich.

The Mounties are coached by former Mount Aloysius volleyball and basketball standout Brianna Baker. Baker has been the coach for 13 seasons and was named the AMCC Coach of the Year in 2018 when they won 17 games and finished second in the league.

Tuskovich is excited to further her education and athletic career at the Mount.

“I really like the atmosphere of the team, and everyone seems to be willing to help anytime,” said Tuskovich.