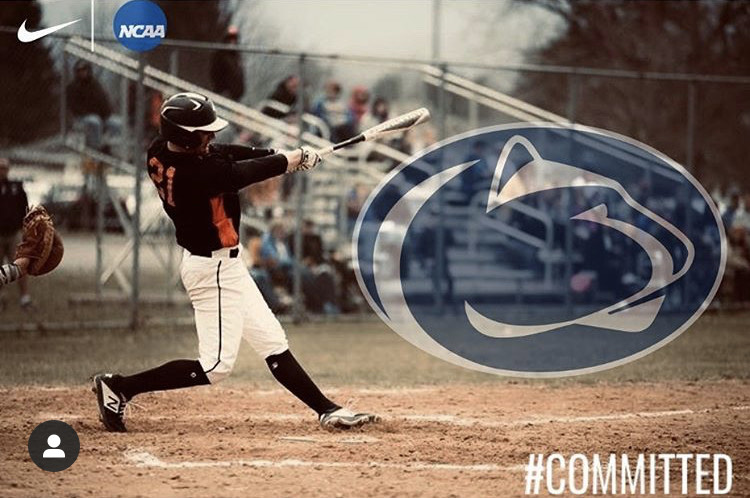 “I want thank my coaches, Coach Sollener, Mease, Lang and Stover because they have been a huge part of my success, I also want to thank coach Dave Brisban for giving a good word to the PSU Harrisburg coach and putting me on their radar,” said Lehner.

“PSU Harrisburg had my major, I want to study civil engineering and their baseball team competes on a national level. I felt like going there was the perfect fit for me,” said Lehner.

This past season PSU Harrisburg was ranked nationally for the first time. They finished an overall record of 33-15-1 and ranked 24th in the nation.

After bursting onto the scene his freshman year, Lehner was a four year starter for the Golden Eagles when the corona virus derailed his senior season. He was looking to help lead his team to the first state championship in Tyrone baseball history.

“My parents have been really supportive throughout the years. My dad really pushed me everyday and taught me about work ethic and always putting 110% in everything I do” said Kevin.

Lehner has had one of the most decorated high school careers in recent Tyrone history. He will finish his high school with a .402 batting average with a .478 on base percentage.

Lehner collected 70 hits with 2 home runs over his three years driving in 45 runs and scoring 38.

On the mound, Lehner’s pitching record over his three years was a 4-4. He posted a career ERA of 3.36 with 40 strikeouts. Lehner’s arm has won the Golden Eagle’s many games over his three year varsity career. He has kept games within 1 or 2 runs allowing the Tyrone bats to come in and win the game.

He controlled the mound in Tyrone’s biggest game of the year last season, shutting down the PO offense helping Tyrone clinch their first Mountain League championship since the 1990s.