Tyrone Wrestling Off to a Bumpy Start 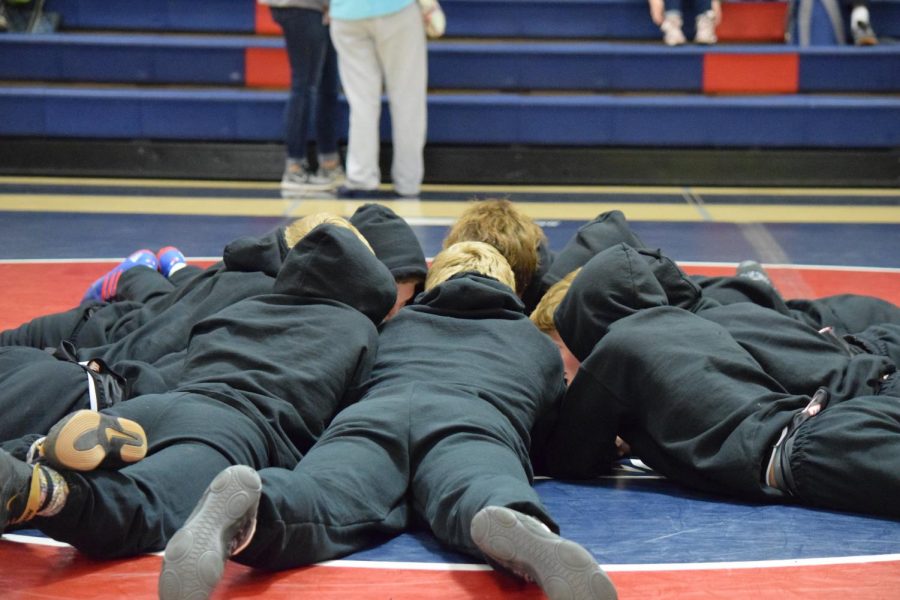 Tyrone Golden Eagle Wrestling had a shaky start to the 2017-2018 season with two on the road losses to the Huntingdon Bearcats and the Saint Joseph Wolves.

“There were some bright spots in our first two matches despite the scores. We wrestled two very tough opponents and fought hard. We came away with some good experience and there were some things that I recognized that needed to be addressed,” said head coach Terry Tate,”We are missing two weight classes, which means we are in need of a 220 pounder and a 152 pounder, so if you’re reading this, come give wrestling a try, it’s a ton of fun and you might even learn a thing or two.”

According to Coach Tate, his goal for the season is to make the District Dual tournament as well as coach his wrestlers to individual success.

“We have a tough group of guys and taking a van-full to regionals isn’t out of the question. I wouldn’t even be surprised if we have a couple of our guys wrestling in Hershey in March,” said Tate.

The Bearcats had six pins on their way to 63-9 win over the Eagles.

Huntingdon started off strong, pinning junior Jack Lewis at 195 and senior Dan Peterson at 285.  They also received a forfeit at 220 pounds. After the first three matches, the Bearcats lead by the score of 18-0.

Hunter Walk then lost a close match against Roland Mills at 113. Walk started off losing 4-1 by the end of the first period but almost made a comeback in the second period to make the score 5-4. Mills chose down to start the third period, and Walk was unable to score, which resulted in the 5-4 loss.

Tyrone didn’t have a wrestler at 120 pounds, which put another six points on the board for the Bearcats. At 126, Isaac Parks lost 12-6, which was followed by a Huntingdon pin against Noah Sprankle. This boosted the Bearcat’s team score to 36-6.

Tyrone finally scored again when Derrick Harris beat Joseph Bailey 5-4. Harris started off trailing at the end of the first period with the score 2-0. Bailey chose down to start the second period and quickly got a reversal. Harris then got the escape point, which made the score at the end of the second period 4-1. Harris picked down at the beginning of the third period and got another two points when he got a reversal. Harris then got two near fall points which made the final score 5-4.

“As a team, I think we all need to step up and push ourselves harder. We tend to not take practices very seriously and we need to push each other harder as well,” said senior captain, Derrick Harris.

Kyle Plummer and Tommy Hicks had the last two matches at 170 and 182 pounds. Both matches resulted in pins for Huntingdon, which made the final score Huntingdon 63, Tyrone 9.

Tyrone was a part of St. Joesph wrestling history as the opponent in their first ever home wrestling match.  Unfortunately for Tyrone, the result was in the home team’s favor as they defeated the Golden Eagles 46-24.

St. Joseph started off with a four-match winning streak, making the score 20-0. The Wolves scored by tech. falling Alex Weaver, pinning Brandon Ixtepan, receiving a forfeit at 152 pounds, and winning 9-7 against Derrick Harris.

Senior Kyle Plummer then put Tyrone’s first six points on the board when he won by injury after landing on his neck and taking up all two minutes of his recovery time. Although Plummer wanted to keep wrestling, the referee thought he was unable to continue.

Tommy Hicks and Jack Lewis both received forfeits at 182 and 195, which added twelve more points onto Tyrone’s team score making it 20-18, St. Joseph.

At 220 pounds, neither Tyrone or St. Joseph had a wrestler, which moved the meet on to 285 pounds were Dan Peterson received a forfeit.

“As the year continues and we work on our conditioning and technique, we will definitely improve,” mentioned freshman Hunter Walk.