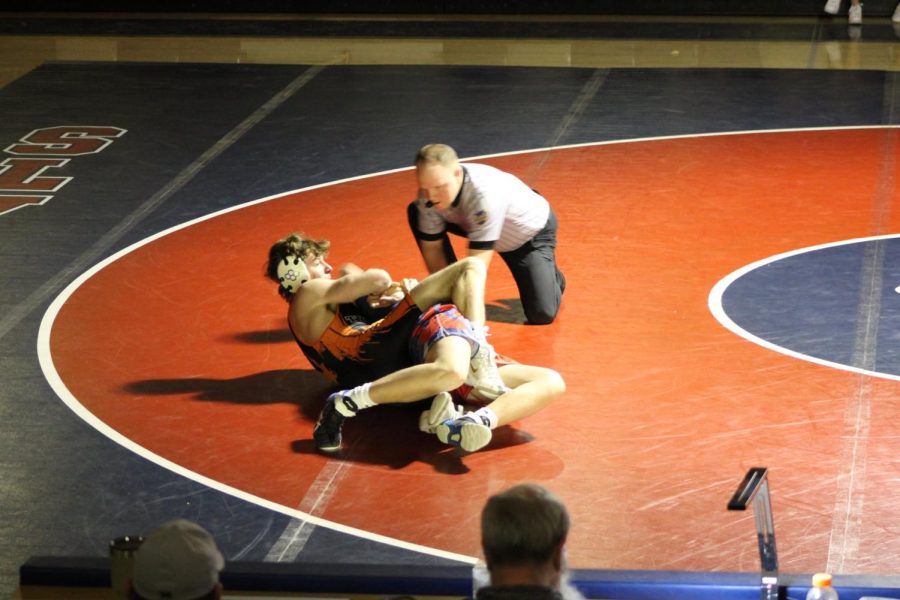 The match came down to the second to last bout of the evening.

Knowing that the Eagles would have to forfeit the final bout at 120, Tyrone freshman Logan Rumberger needed a pin over Huntingdon’s Simpson for the match to end in a tie.

Rumberger won easily 8-0, giving the Eagles a 31-27 lead, but Simpson played turtle for much of the bout to prevent Rumberger from getting the pin necessary for Tyrone to tie the team score.

¨My team needed six at that moment but I couldn’t follow through,” said Rumberger, who wrestled well but was disappointed that he couldn’t get the pin to avoid the team loss.

The Golden Eagles had seven individual wins on the evening. Three were pins, one major decision, and three decisions.

Just before Lash was Sophomore Andrew Weaver who managed to get the first pin of the Night against Huntindons Garlock. Garlock was able to hang in with Weaver till the 2nd period but Weaver overwhelmed him, pinning him in the 2nd period.

Sophomore Lukas Walk got the first points on the board for the Eagles with a 4-0 victory over Eric Mykut.

Junior Reese Wood got himself in a dog fight against Huntington’s Devin Grubb. Both wrestlers were going at it but luckily for the Eagles, Wood was more advanced and had a 4-2 decision over his opponent.

Senior Jason Barr went head hunting at 215 and clutched a 5-2 decision over Huntingdons Poorman. Barr took him down in the 1st. In the 2nd Poorman let Barr up where Barr took him down again but Poorman gotta stand up. The only thing that happened in the 3rd was a controversial stalling call on Barr.

Despite losing, heavyweight Braden Ewing almost upset a state-ranked opponent. Ewing and Huntingdon’s Singleton both wrestled very smart and cautiously. Singleton scored first with a stand up but Ewing countered with a reversal in the 3rd making it 2-1 Ewing. Unfortunately for the Eagles, Singleton snaked around Ewing in the final second of the third making the final score 3-2.

Including Singleton, Huntingdon had 6 wins. Three were forfeits, one was a decision, and the remaining two were forfeits, giving the Bearcats a narrow 33-31 victory over the Eagles.