Tyrone holds off Davis and the Blue Devils 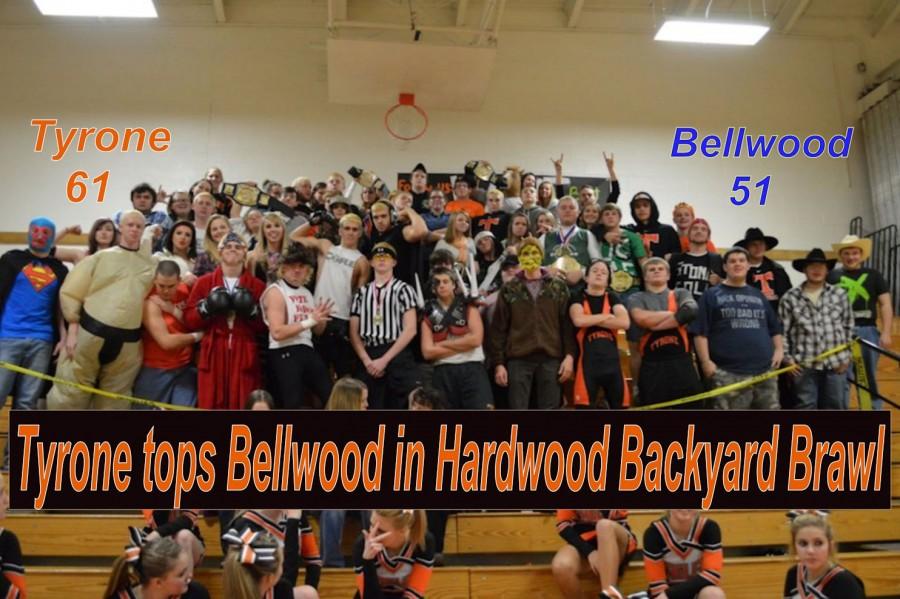 The Tyrone "Dawg Pound" student section was out in full force Friday with a WWE theme.

The Backyard Brawl took to the hardwood on Friday night in a game that was very similar to this year’s gridiron classic.

Just like they did under the Friday night lights, the Golden Eagles won a hard fought but close battle against the Blue Devils of Bellwood-Antis, 61-51.

“We came out with a lot of energy and that helped,” said senior guard Pooky Soellner, ” In the first half our shots weren’t falling but we came out hard in the second and finally started hitting some shots and eventually came out with the win.”

The first half was a nail bitter with both teams struggling to make baskets and capitalize on big turnovers.

The score was dead locked at 26 at the half as both teams had to regroup and come out fighting.

It was the Golden Eagles who came out of the locker room after halftime with the necessary adjustments as they scored 18 in the third quarter to take the lead.

They also showed tough defense after switching from man to a box-and-one defense, which held the Blue Devils to only four points in the third quarter.

Tyrone had some premier scoring with Pooky Soellner, Shane Geis, and Anthony Politza all scoring 14 points a piece.

“Defense was the motor against Bellwood,” said Geis, “we outscored them in the third and were able to coast the rest of the way.”

Freshman Jacob Meredith also got the job done, taking the pressure off his teammates by scoring three points and handling the ball very well against Bellwood’s electrifying defense.

“I’m very honored to be able to play a little varsity this year,” said Meredith, “I’m glad to have this opportunity.”

Aside from Geis, Meredith is the only other true point guard on the squad. Throughout the season, when Geis gets in foul trouble or needs a break, Meredith will have to step up and play beyond his years.

The Blue Devils didn’t give up easily however, as they outscored Tyrone in the fourth quarter 21-17.  But it wasn’t quite enough for the win as Tyrone held on for the 61-51 victory over the Blue Devils.

Tyrone’s defense was challenged by the shooting ability of Nathan Davis.  They responded by keeping him under 20 points, something other teams have had a tough time doing against Bellwood.

“We knew we had to stop Davis.   We had to think one step ahead of him which is tough because he’s a good player,” said senior point guard Shane Geis,  “But it wasn’t just me, it was a team effort.  Tristan Lingafelt was on him a lot as well.”

Tyrone has a conference game Tuesday, December 9th against Phillipsburg Osceola at home.