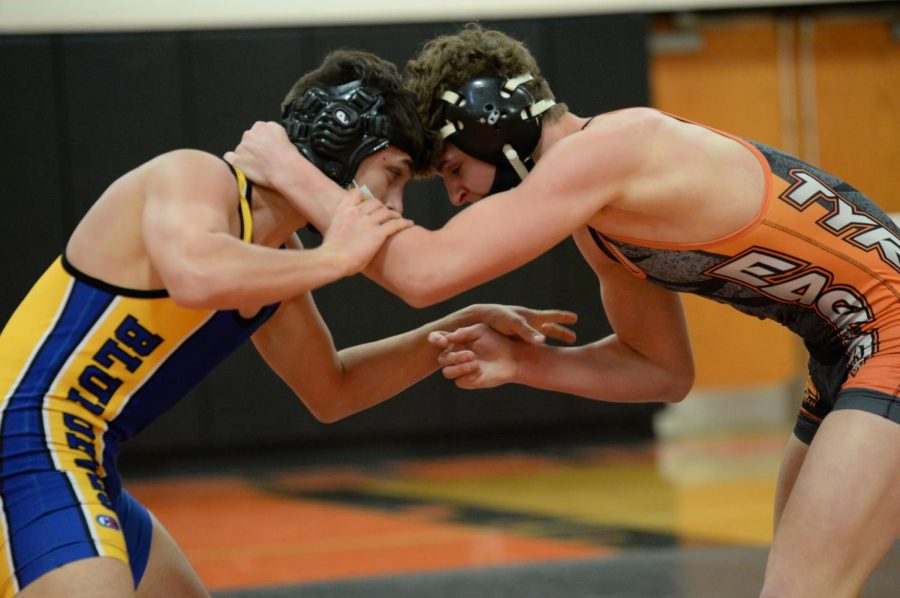 The Tyrone Golden Eagles wrestlers exorcised the Bellwood Blue Devils last night with a dominating 54-11 victory to improve to 6-4 on the season.

“I think we looked great last night,” said Tyrone Head Coach Terry Tate. “We wrestled tough and our conditioning is coming along. I feel like we are making the most of our shortened season and it makes us excited to see how we do post-season.”

To start the match, Tyrone got wins from Ashton Sipes with a forfeit at 126, Luke Walk with a pin at 132, Andrew Weaver also with a pin, and Reese Wood with a 6-0 decision over Bellwood’s Xander Shank at 145.

“Reese wrestled hard and kept his foot on the gas. The score didn’t show how much he actually controlled the match,” said Tate.

With no match at 152, Bellwood scored when Blue Devil standout Aiden Taylor pinned Tyrone’s Jermaine Myers, who moved up a weight class to wrestle Taylor at 160. Then at 172, Tyrone’s Zack Lash lost by tech fall to Alex Taylor.

“Butch Barr went out and took care of business. He has been pretty selfless all season and he stepped up last night when his number was called and got a very quick pin and bonus points for the team,” said Tate.

At heavyweight Tyrone’s Braden Ewing had the most exciting match of the evening, beating his opponent Nate Jennings in overtime with a quick slide by making the score 3-1.

“Braden came in and got a good win. He took 6 or 7 shots and never gave up. For a ninth-grader, he’s very impressive,” said Tate.

This was the class of 2021’s last home match for TAHS, and even though he didn’t get to wrestle, stand out senior Hunter Walk was pleased with the Golden Eagle’s final home match.