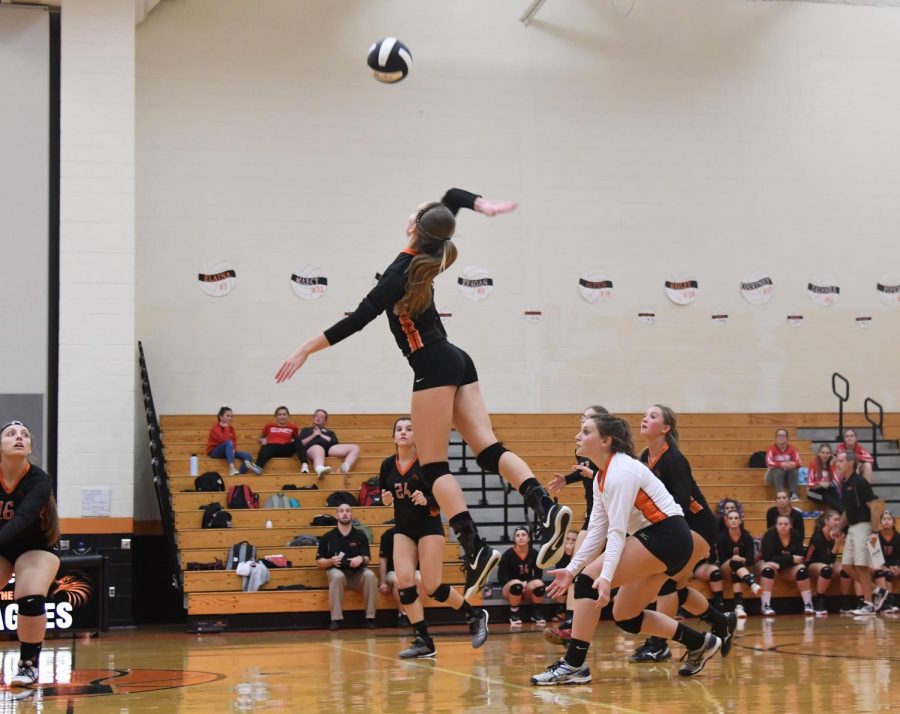 Outside hitter Reagan Irons preparing for a hit.

The team was apprehensive about adjusting to new coaching styles and gaining a bond with Coach Moyer, but with preseason almost over, the girls are looking forward to a successful season.

“I had two goals going into coaching this year,” said Head Coach Brandi Moyer, “to help everyone grow as athletes and compete more mindfully. I think practicing efficiently with maximum effort, consistency with our lineup and team conversation will definitely help. As long as we all continue to do those things throughout the season it will make for a really successful year.”

Former head coach Mike Kraft built the Tyrone program from a perennial losing team into a winning program with a successful 10-9 2021 record, playing agianst some of the best teams in the state.

Moyer’s goals are no different than her predecessor, to win the Mountain League, compete for the district title, and qualify for the state tournament.

Returning senior Kaitlyn Houck is sure the Lady Eagles have what it takes to win a district title this year.

“With the bonds and skills on our team, I think we have a good chance of going far. I expect everyone to work hard so that we can have a successful year. Our team is very balanced as far as both offense and defense, so I’m hoping it will play a large role in our record,” said Houck.

But its not all about wins and losses, according to Houck. “Another goal I have is to remind the team of why we are there, not just to win but to have fun and enjoy the moment while winning,” said Houck.

Returning letter winner Reagan Irons is also hopeful that they can make it to the district finals and beyond.

“I expect the team to compete and be able to make any game our game,” said Irons.

The Lady Eagles are excited to see what this upcoming season has in store for them, and are putting in effort in the practice gym to get where they want to be.