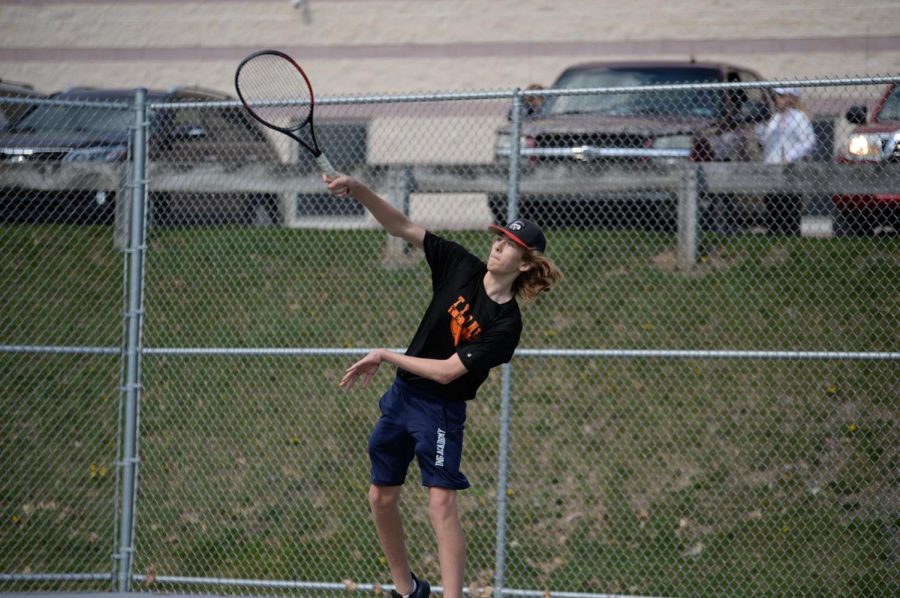 Will Grot smacks the ball across the net during a match

By Dean Grassi and Andrew Savino

With last season canceled due to COVID, the Tyrone boys tennis team’s quest for a Mountain League Championship has been on hold for over a year, but the boys are excited to be off to a good start this year.

In the 2019 season, the boys had a record of 7-9 and were co-champions in the Mountain League, but have plans to make that even better in the 2021 season.

“We are ready to hit the road for our revenge tour. As AC/DC said, it’s a long way to the top if you wanna rock and roll,” said senior Nick Lewis.

With four seasoned seniors returning to the team they have a solid starting lineup and with the guidance of the older players, the freshman will become valuable members of the team.

The boys kicked off the season with a win over Mountain League rival Huntingdon Bearcats. Then on March 18th, the team won their first home match against the Windber Ramblers.

“I am looking forward to getting in a lot of matches this year and continuing the Tyrone tennis legacy and be the mountain league champs,” said senior Kelton Raabe.

The Eagles lost to Hollidaysburg but recovered to win a key Mountain League match against Clearfield. A few days later the Eagles got their second loss in a tough match against Juniata.

With a win against Tussey Mountain, the boys improved their record to 4-2.

The boys go to Punxsutawney today where they will attempt to add a win to the record.