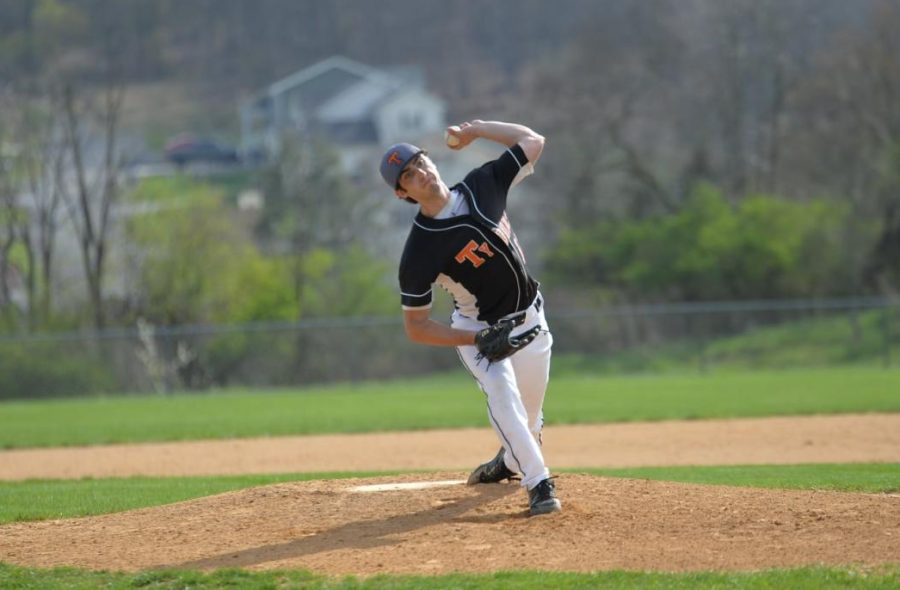 After their game against Clearfield was postponed earlier in the year, the game was rescheduled as part of a doubleheader. All of Clearfield’s previous games were close, so the Eagles knew they were going to fight.

Junior Zac Legars took the mound for the Tyrone in game one. LeGars was lights out yet again for the Eagles, only allowing three hits and one run through the game. The defense was strong and helped LeGars get outs, putting up 0 errors.

Tyrone hitter put up 10 total hits and 27 total at-bats. Not only did Zac Legars pitch a phenomenal game, but he also had 2 hits with 3 RBIs.

Senior Nick Lehner also put up 2 hits for the Eagles.

With the pitching as well as the batting showing up to play, the boys beat Clearfield 8-1.

In the next game, freshman Landon Hamer started on the mound for the Eagles. This was Hamer’s first start of the season, hoping to come into play to replace the injured pitchers.

Hamer dominated on the mound, only allowing 3 hits. It helped to have that strong defense backing up Hamer as well. He finished strong in the sixth inning, where he only allowed two runs.

Senior David Lang stepped on the mound for the last inning to get the job done.

Tyrone carried over the offense to the second game putting up 14 hits with 27 total at-bats. Zac Legars(Jr) and David Lang(Sr) each had three hits and both collected two RBIs. Other noticeable hitters were senior Aiden Coleman, freshman Landon Hamer, and senior Nick Lehner, all with two hits.

The final score for the second game was 11-4 with the Eagles claiming the victory.