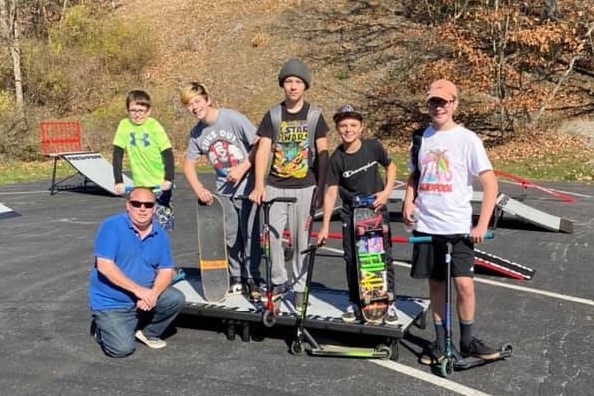 Mayor Latchford (bottom left) poses with some of the local skatepark.

After years of discussion and planning, the dream to have a skate park in Tyrone has come true, though in a more scaled-back version than originally planned.

Tyrone Mayor Bill Latchford has been working on this project for about seven years. He was first approached in 2014 by a group of youth about the lack of places for skaters to gather in Tyrone. Latchford agreed that a skatepark would be a good addition for the community and began advocating for a place to give skaters a safe place to ride.

“I immersed myself in the thought and started some research. I was determined to bring a skate park to Tyrone’s skaters and scooters,” said Latchford.

Latchford established a Facebook Page in August 2014 to promote the idea and connect supporters with each other.

The group’s first goal was to build a permanent skatepark. However, a concrete and/or wood vertical ramp skate park proved to be more expensive and difficult to build than the borough could afford, so Latchford began researching portable equipment that brought the costs down dramatically.

After much consideration, the borough invested in a portable skate park by FreshPark, a company from California.

While it has only been used for a couple of days so far, the new portable skate park has been a hit with local skaters.

“[I] just checked out our little skatepark with my kids and I gotta say, it’s even better than I was expecting equipment wise. Kids loved it and this 40-year-old felt 15 again,” said Tyrone resident Jimi Gwinn on the Skate Park Facebook Page shortly after the park was first set up.

Jeff Miller of Tyrone agreed that the equipment is a nice addition to the community.

“I have been waiting for this since 1990, I’m not sure if my body is still able to handle a skate park but after waiting this long I’m sure going to give it a try,” said Miller on the Skatepark Facebook page.

The portable park debuted on November 7th in the community pool parking lot. The last time the skate park was set up it was used by approximately 30 skaters.

“We had folks there from 7 to 48 there and they all had a great time. I had someone on the Facebook page I have set up that they being a 40+ year old felt 15 again. That is very cool in my book,” said Latchford.

One of the advantages to portable equipment is that it can be moved to locations around the community. So far it’s been set up in two locations in town.

“It’s something our youth need to keep themselves active and healthy. It also keeps them preoccupied with positive behavior and away from the idea of negative behavior,” commented Tyrone resident Jo Ellen States on the Skate Park Facebook Page.

However, getting to a successful end for this project was not easy.

“There were so many obstacles in the way. From financing to location there was always something getting in the way,” said Latchford.

Some local residents also got in the way of the project, complaining that they did not want a skate park near their homes.

“I had folks that complained just for the two days that we had it at the swimming pool parking lot. It was not about the noise, because there was not much of that. It is the stigmatism that skating has gotten over the years,” said Latchford.

This skate park has received a lot of attention, some good and some bad, but the skating community seems to appreciate it.

“We were able to get two skate sessions in, of about four or so hours each, up at the Tyrone swimming pool parking lot. This spring we will be looking at the Community Worship Center parking lot as a more frequently used lot for the Skate Park,” said Latchford.