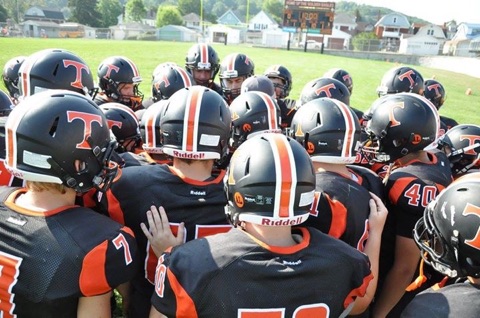 The clash of the Junior Varsity Backyard Brawl culminated with loss for Tyrone at the hands of their rivals from Bellwood, 32-6.

From the first kick, Bellwood’s offense dominated Tyrone. The Blue Devils running game drove down  Tyrone’s throat early, setting up a hitch to go ahead for their first score of the game.

Tyrone started off with a good drive on their first possession, then it went downhill from there. Tyrone’s running back, Brandon Loose had very little room to run against Bellwood’s defensive line. Tyrone also tried to throw the ball, but because Bellwood controlled the line of scrimmage, they were forced to punt.

In the second quarter, it was all Bellwood.   Bellwood’s defense forced the Tyrone to punt and then the Blue Devil’s offense was at it again. They drove the ball down the field and scored. At the end of the first half the score was 20-0 in favor of Bellwood-Antis.

The second half began with a strong defensive stand for the Golden Eagles. Then Tyrone drove down the field, relying on running back Brandon Loose, and scored their first touchdown of the game. That made the score 26-6 going into the fourth quarter.

The fourth and final quarter once again belonged to Bellwood. The Blue Devils scored a few more touchdowns by running the ball, making the score 32-6 with almost three minutes left. Tyrone’s offense stalled and would not produce any more points.

The Junior Varsity squad looks ahead to their game next week against Central on Monday.