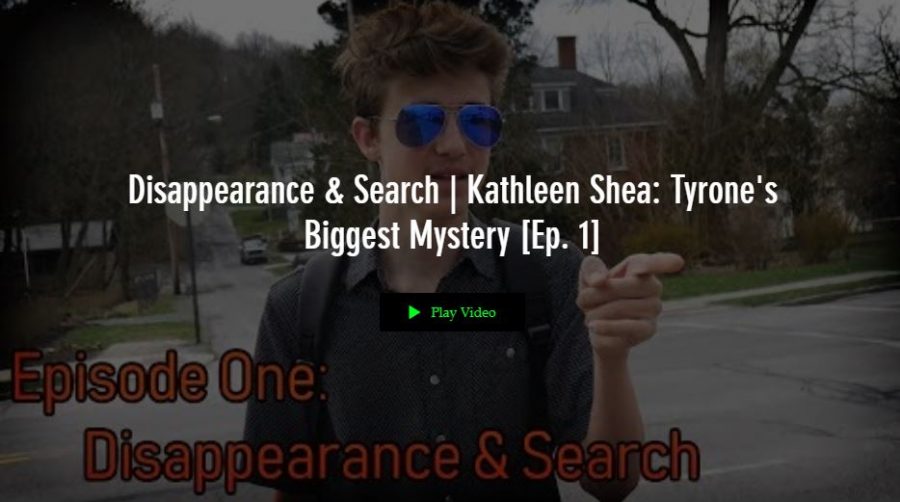 Following the release of his first full length film in January, Tyrone junior Jeremy Byers is back with another video production. This time it’s a documentary about one of the most infamous and sad chapters in Tyrone history.

In this newly released documentary, Byers investigates the unsolved disappearance of six year old Kathleen Shea on March 18th, 1965. The four part documentary chronicles the event and the aftermath of Shea’s disappearance.

“Kathy Shea’s disappearance was something that a lot of people talk about so I decided to make a documentary simplifying the entire situation for Tyrone,” said Byers.

Shea was also the subject of an Eagle Eye feature story last year. Click the related story link to read our previous coverage.

Byers reached out to people close to Shae, and others who were around during the time of her disappearance. He has done weeks of research to correctly portray what happened.

“I was surprised to see how much support I received after starting the documentary. It really showed me how much Tyrone cared,” said Byers.

In the first episode, Byers interviewed multiple people in the Tyrone community that were around when the incident happened. One of the people Byers spoke to was Tyrone Middle School teacher Steven Stoner.

“Talking to locals about her disappearance gives a personal connection between the community and the viewer,” said Byers.

Byers just released the second episode of his documentary, in which he shares information about the aftermath of the incident and how people were feeling. Also, he continues talking to more Tyrone residents.

“If you are curious about her disappearance this documentary should give you all the information you need to get connected. Also, it proposes ideas that the viewer can run with to make their own conclusions about what happened to Kathleen Shea,” said Byers.

Episode one is embedded above and episode two is below.

Byers plans to make two more episodes of this documentary, and is open to suggestions to improve the production. Byers would like anyone with any information on the disappearance of Kathleen Shea to contact him at [email protected]

In addition to producing his own films, Byers has also started his own business, Joker Studios, to produce videos and advertisements.