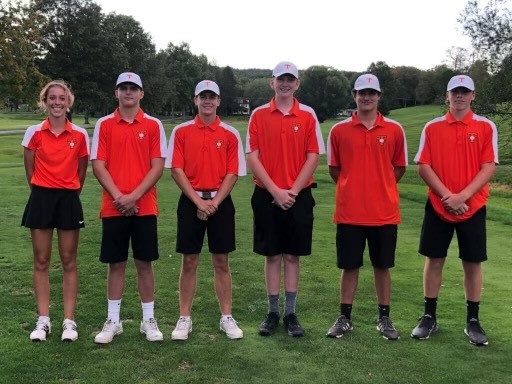 Tyrone’s varsity golf squad has had a successful season so far, but they will be challenged in their last Mountain League match today at Nittany Country Club in Bellefonte.

Tyrone is currently 16-3 and tied for first place with Bellefonte.  Today’s match will likely determine the Mountain League Championship.

Tyrone’s last match at Philipsburg-Osceola was their best performance yet, putting up a total score of 329 and defeating all seven teams at the match: Hollidaysburg, Penns Valley, Bellefonte, Bald Eagle, Huntingdon, Clearfield, and Philipsburg.

Senior Luke Brooks put up his best score of the year, a match best 77. Williamsburg’s RJ Royer, who is playing for Tyrone as a co-op, also carded a 77 to lead the Eagles to victory. Tyrone’s Cassidy Miksich (84) and Cyrus Ahlert (91) rounded out the Tyrone team.

Tyrone hopes to carry the momentum onto the next match to catch a Mountain League title but it won’t be easy. Nittany is a lengthy, difficult course to play on. It is also Bellefonte home course, so their players are familiar with the layout.

The match begins at 1 pm.