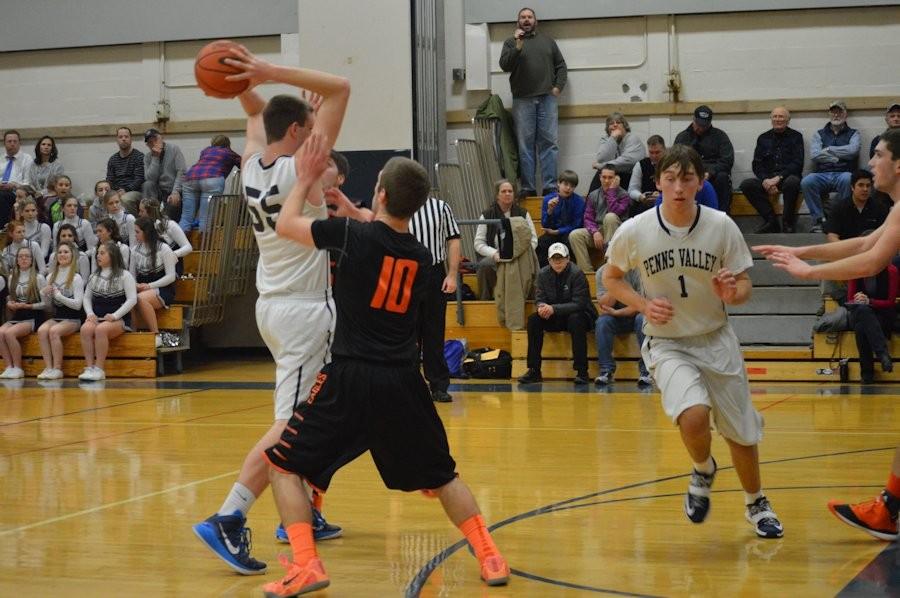 Tyrone clinched the Mountain League title on Friday night in an exciting comeback win vs. Bald Eagle.  The next day they were named the number one seed in the upcoming District 6 playoffs.

With the league title secured and playoff seeding set, Tyrone was ripe for a letdown with an essentially meaningless game at home versus Penns Valley.

Earlier in the season the Eagles defeated the Rams 52-50 in an exciting matchup on the road, but at home the Eagles had a difficult time putting the ball in the net and dropped a defensive battle to Penns Valley, 54-41.

The Eagles and Rams both came out slow in the opening quarter.  The first bucket did not occur until four minutes into the game and the quarter ended with both teams having just four points.

The second quarter wasn’t much different, with both teams playing tough defense and missing shots, the score at the half was deadlocked at 15.

The Eagles have been a great second half team most of the season but not this night as they were uncharacteristically outscored by the Rams 15-8 in the 3rd quarter.

The game then took a turn for the worse in the fourth and the Eagles lost the game 54-41.

The Eagles couldn’t buy a shot from the three point line. They had good looks all night, but the shots didn’t fall.

Anthony Politza led the team with 13 and Pooky Soellner was second with nine points.

This game of course doesn’t change anything. The Eagles remain Mountain League Champs and are the one seed in the upcoming playoffs, which begin Monday vs. sixteen seed Cambria Heights in Altoona.

The Rams had two premier scorers with Logan Pearce having 19 points and Logan Johnson with 18 points.

“I would sooner have lost tonight then next week. If we lose next week we are packing our bags and coming home” said head coach George Gripp. “At the end of the day losing right before playoffs isn’t the worst thing that can happen.”

The Eagles have their last regular season game this Friday at Richland. Tip-off is at 7:00pm.