Tyrone Fails To Tame The Tigers of Hollidaysburg

The Golden Tiger offense proves to be too much for Tyrone 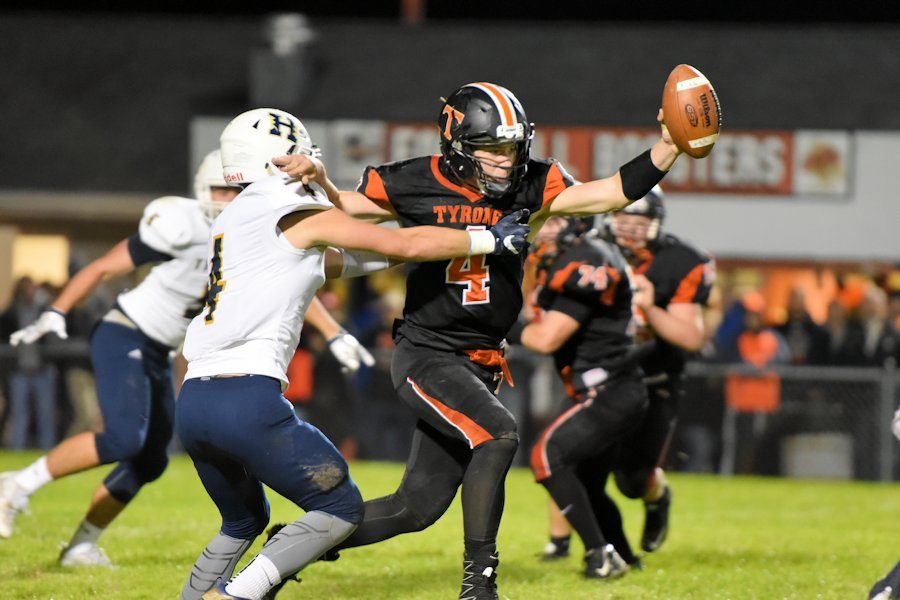 Tyrone’s head coach Jason Wilson looked to celebrate his 31st birthday Friday with a victory, but the Golden Tigers of Hollidaysburg were the ones to take the cake, pummeling Tyrone 34-13 at Gray-Veterans Memorial Field Friday night.

This was the first meeting between Tyrone and Hollidaysburg since 1974. Before Friday, the Golden Eagles led the all time series between the two teams 4-3. Hollidaysburg tied up the series with quite the emphasis.

The Golden Tigers offense was lethal, amassing 426 total yards on offense. Senior quarterback Jarrett Cavalet can take credit for the majority of those yards. He had 134 yards and two touchdowns through the air and 162 yards and a touchdown on the ground.

“He’s a really good quarterback,” said Wilson. “We said going into the game that he’s a solid, quick runner and he proved that in the game”

Tyrone’s defense had trouble stopping the Tiger’s well rounded offense all night. Hollidaysburg slashed through the Eagle defense for 265 yards on the ground and also had 134 yards by way of air.

“I don’t think we expected anything different than what they ran,” said Coach Wilson. “Our main focus the last two weeks has been no penalties, no turnovers, doing the little things and eliminating the opponent’s big plays”

Hollidaysburg also shut out Tyrone for the first three quarters. The Golden Eagle offense, led by quarterback Denver Light, managed to score two late touchdowns in the fourth quarter though. Light connected with Alex Weaver for the first and Parker Mitchell for the second. Mitchell finished the game with 8 receptions for 94-yards.

“Our biggest problem is tackling and playing with some fire” said Wilson. “We still have a lot of work to do but I believe we are very close to turning the corner and putting it together.”

The Golden Eagles travel to face the Penns Valley Rams this Friday in a crucial Mountain League match up.