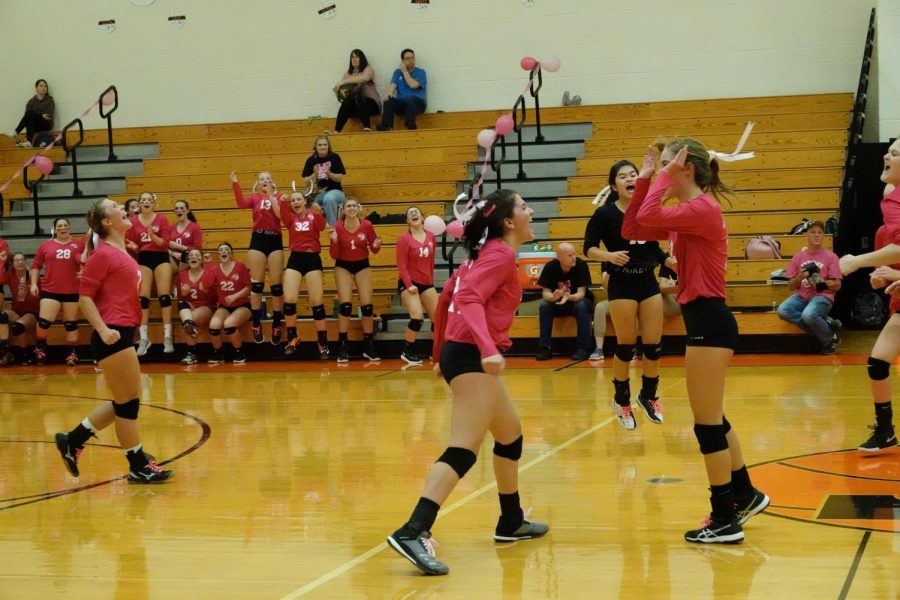 The team celebrating a point.

The Lady Eagles played the Bellefonte Raiders this past Tuesday on the Raiders’ home court. The Eagles had an impressive win Thursday against the Penns Valley Rams and were looking to continue their winning streak.

The next set had a completely different tone. The Lady Eagles couldn’t be stopped from the service line. Freshmen Reagan Irons had several service runs that carried the Eagles through the set. The Lady Eagles took the set 25-8.

The last set carried the same energy. The Lady Eagles’ momentum couldn’t be stopped.  Junior, Mattie Cherry, had a killer night with 12 service points, 21 assists, 3 aces,and 7 digs. The Eagles kept a relentless lead the entire set, and were even able to put some younger players in. Tasanee Hensley came in and went on a small service run to take the set 25-12.

“This game proved that the Penns Valley game wasn’t a fluke. This team is capable of going into a game, dominating teams, and not letting up. In order to be a great team, we have to do this every game and never let other teams off the hook. Bellefonte was a good sign that we are on the road to becoming a great team,” says Senior Bri Foy.

Tyrone improved to 9-4 overall and 9-3 in the Mountain League.