Tyrone Band Brings the X-Citement in 2020 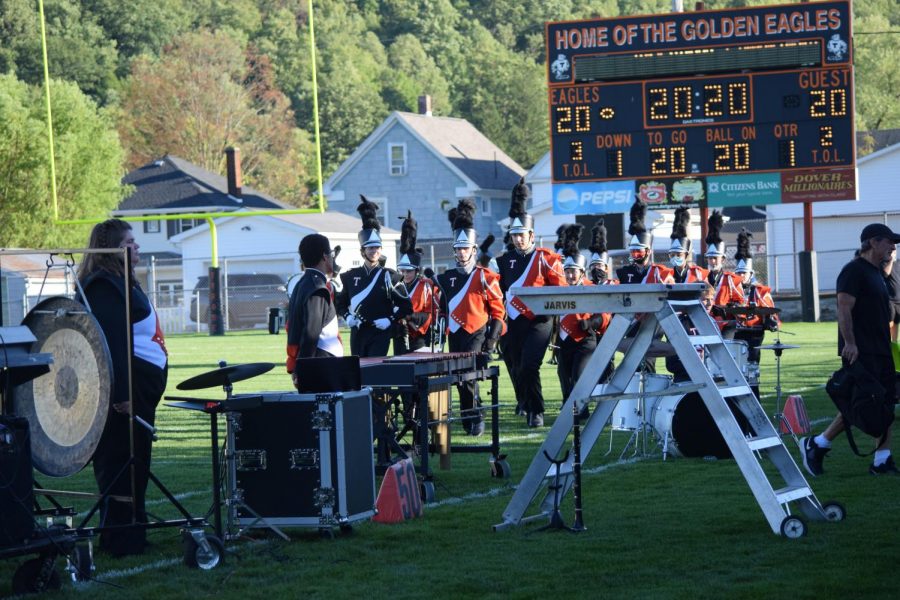 Despite the COVID restrictions which limit crowds and canceled the regular fall competition season, Tyrone band director David Hock is excited to perform this season. The band is as large as it has been in several years, with forty members taking the field on Friday nights.

“My expectations are to keep it as normal as possible for the kids to have the best musical experience, even though we don’t have competitions I still want them to have a good experience and grow as musicians,” Hock said.

The marching band stepped on the field on September 4th for their first performance of the year at the annual Meet the Eagle event. Attendance by the public was allowed and fans were treated to the premiere of the band’s 2020 halftime show. The band also performed in front of the band parents prior to kickoff and to the senior football parents at halftime during last week’s first home football game against Bellefonte.

The band, majorette, and band front played and performed to three songs titled X-Clamation, X-Citement and X-Pression under the title of eXpressions.

“I loved the music and when I heard it and found it exciting,” said Band Director David Hock.

Majorette instructor Marcia Fink has raised the performance bar for her students this year.

“The music this year is fun and colorful and so are our flags and props, ”said majorette instructor Marcia Fink, “The front is doing very well, all the members either were in the front or were here last year so we have experience.”

Despite the coronavirus restrictions, drum major Becca White is pleased with the development of the show.

“I think this year’s show is gonna be a good one because the music is really upbeat and we’ve all been working really hard on it,” White said.

This year’s show is all about different types of expressions and emotions that people can show.

“There is no theme other than different expressions and it’s groovy and fun, the students really love it,” Hock said.

Percussion instructor Rob Bonsell is happy to improve the drum lines skills even without competitions.

“I mean just continuing to work hard and working on technique it’s the biggest thing you can always improve,” said Bonsell, “Even though we’re not competing, we expect the kids to work hard.”

This year the band has gained quite a few new members, or as the veteran band members call them, “newbies.”

Drum Major Becca White believes that they are doing well even though it’s been a rough year.

“I think they are picking everything up quickly,” White said.

The band has reached a total of 40 members this year, which is more than they’ve had in many years.

“We are able to add more difficulty to the show and as the kids become more comfortable with their abilities. We are not where we want to be performance level [wise], but that is a process and they will get better after each performance,” said Fink.

The following students are members of the 2020 Tyrone Marching Band: