The Three Musketeers: A classic worth reading 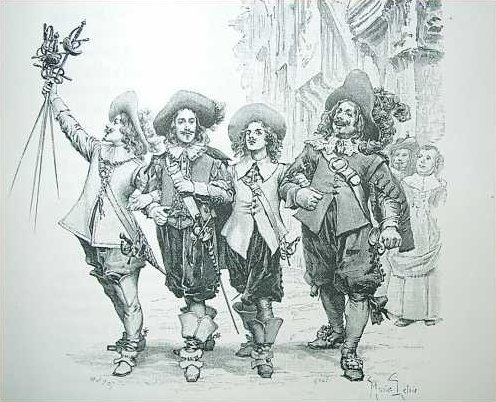 The Three Musketeers is a definite classic. If you have not read it, watched the movie adaptations of it, or ate the candy bar named after Alexandre Dumas’ famous story, you live under a rock.

The story begins in a small town where a young gentlemen, D’Artagnan, is introduced. He is barely an adult, ready to start his career.

Being the hot-blooded person D’Artagnan is, he goes to join the extremely famous musketeers. Immediately following his arrival in town, he starts a fight with three established musketeers, Porthos, Aramis, and Athos. (These are the three musketeers the book is named after.)

D’Artagnan is allowed to become a guardsman due to his impressiveness in the handling of the situation. Adventure starts. He then falls in love and attempts are made on his life. He, Porthos, Aramis, Athos, and their servants travel all over France to recover the Queen’s diamonds to save her from the King’s anger. They foil the cardinal’s plot for power time and time again, winning the utmost affection on behalf of the Queen and the musketeer captain, M. de Treville.

The king, however, is normally somewhat oblivious to happenings occurring in his kingdom. Over all their travel’s a strong archenemy appears.  Lady de Winter an agent of the Cardinal’s uses her feminine charm and wit to gain esteem and political power for the Cardinal. She has ruined the lives of many men in her thirst. At last, she is caught and placed under heavy guard. A young extremely religious Puritan man watches over her. Using this to her advantage, she plays a pious lamb. With his help she escapes again swearing revenge on D’Artagnan for imprisoning her. With her escape the is a manhunt over France to find her. Despite the combined efforts of D’Artagnan and friends they are too late. Lady de Winter poisons D’Artagnan mistress and escapes. They catch her and put her on trial.

It turns out all three musketeers, the guardsmen and the executioner have dirt on this lady and they condemn her to death. Her head rolls. The Cardinal put back into his place, political unrest slows and Aramis goes to a covenant, Porthos goes to a life of luxury as a married man, Arthos stays on in the guard and D’Artagnan is promoted to lieutenant. This is a story where everyone lives happily ever after. The end.

The Three Musketeers is written in a rolicking style with something happening every chapter. Originally published as a newspaper serial, it keeps you on your toes. It places emphasis on loyalty to your country, your queen, your friends.

A big theme throughout this book is stick to your instincts and persevere through and you will be fine. You might even get a diamond ring from the Queen. However, strange women are not to be trusted. They could be thieves or murderers or both. The hiring of an executioner and trialing the criminal yourself is no longer encouraged ,but justice is covered throughout the entire book.

The novel has a great deal of old English and is originally translated from French so their is an occasional odd sentence that strikes you. The dialogue is also rather amusing. Characters talk in an extremely formal manner, even when they are yelling insults at each other in the midst of a duel. It is rather amusing at times.

Another slight issue the book contains is historical inaccuracy. It takes place in 1625. Events discussed in the book, like going to the Baths for your health, wasn’t even thought of at the time. Dumas was known for historical misconceptions. He supposedly wrote thousands of works in his lifetime and often paid others to look up the facts for him, not that he cared anyways.

Overall, The Three Musketeers is a book that everyone should read at least once in their life.