The Numbers Speak for Themselves: TAHS Students Lead the Region in Academic Growth 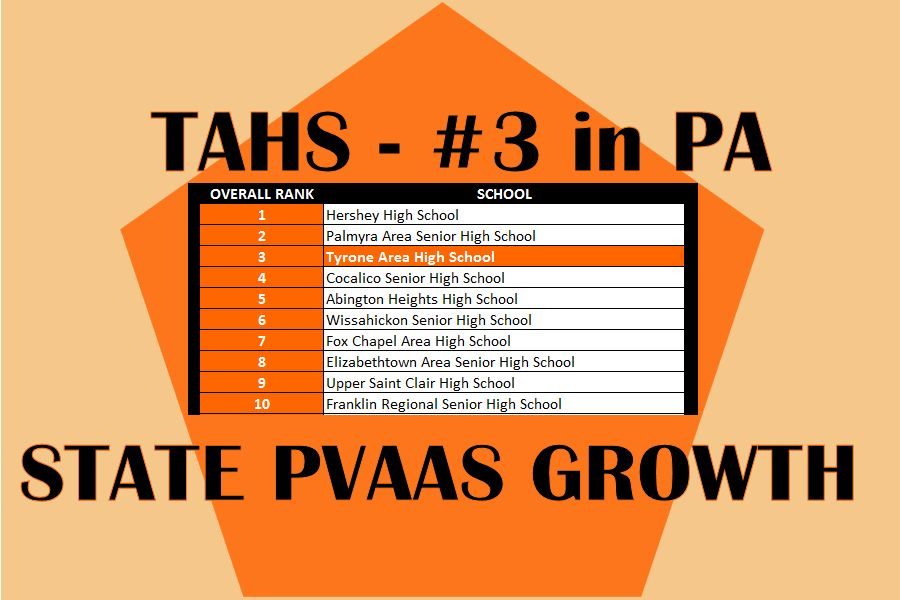 Tyrone’s stellar reputation for excellence continues to extend beyond the football field and into the classroom.

In 2015 Tyrone received one of the most prestigious awards given to a public school, a National Blue Ribbon Award from the US Department of Education. Already this year, Tyrone has been honored with more top scores in several other measures of academic achievement.

According to Tyrone High School Principal Tom Yoder, there is no magic formula for Tyrone’s success.

“I believe the difference comes in areas that are not easily measured – for example – a positive climate for students and staff; a focus on the importance of academics; an orderly school environment; and excellent teachers who truly care about kids and the subjects that they teach,” said Yoder.

PVAAS – Third in the state

PVAAS stands for Pennsylvania Value-Added Assessment System and is a state wide system used to track the growth students actually make beyond what statistical models predict they should make. PVAAS uses data from the annual Keystone Exams to determine school rank.

All schools in the surrounding area were ranked significantly lower than Tyrone.

Among Blair County schools, Hollidaysburg was the next highest ranking school on the list at 297, followed by Bellwood at 308, Altoona at 390, Williamsburg at 417, Central at 497 and Claysburg was ranked last in Blair County at 549.

Keystone Proficiency Rate – Above state average across all testing areas

The Keystone Exams are taken by all high school students at the conclusion of several testable courses, including Biology, Algebra I, and English.

Tyrone’s Keystone proficiency rate is higher than state average in all testing areas. 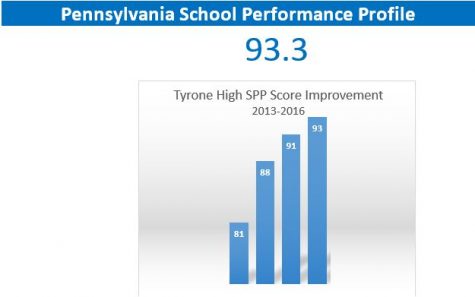 Tyrone’s scores are especially impressive among students who come from economically disadvantaged households.

“Our teachers and students work so hard and are very focused on growth and achievement – and this makes the difference,” says Yoder.

“The students have to master a certain number of questions on a new skill each day.  Then once they have shown mastery on the new skill, they are immediately pushed into a cumulative review that covers everything I’ve taught over the course of the year so far, and chooses questions for them that they need to practice the most,” said Tyrone High School math teacher Erica Martin.

Part of what makes this program successful is that it is individualized to meet each students’ needs. The program gives each student questions based on their areas of greatest need. Once a student shows improvement on a given skill, the program will suggest that question type less frequently.

“My students are retaining their skills so much more because they are reviewing old problems every single day.  In a typical math class, when you don’t do or see a problem for a few weeks – you forget how to do it,” said Martin.

Tyrone also has very high SPP scores. Pennsylvania’s  School Performance Profile (SPP) is a statistic developed by the State Department of Education. The SPP determines an academic score to rate public schools. This score is based on a 100-point scale.

According to 11th grade English teacher, Steve Everhart, no high school within 100 miles of Tyrone has a higher SPP score. 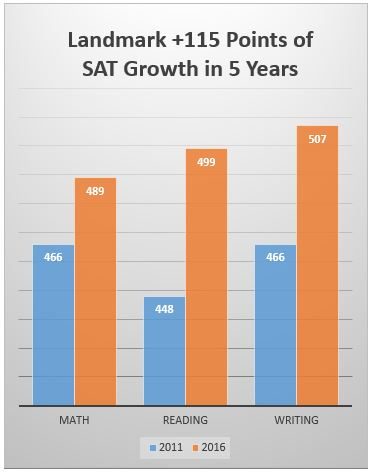 The NOCTI is a standardized test for students studying career and technical programs in high school. There are six Assessment Groups that students at Tyrone are offered. Those groups are manufacturing technology, nursing assistant, carpentry, production agriculture, accounting, and workplace readiness.

Tyrone’s test scores are improving as our school works hard to help students to be successful. These scores reflect the success of both the staff and the students. Tyrone school will continue to try and improve its scores in the future.

“We constantly evaluate and re-evaluates our curriculum and our teaching strategies to remain on the cutting edge. It is important never to become complacent and always continue to explore ways to improve what we are doing,” says Yoder.