The Look Ahead: Eagles and Bearcats Fight for their Playoff Lives 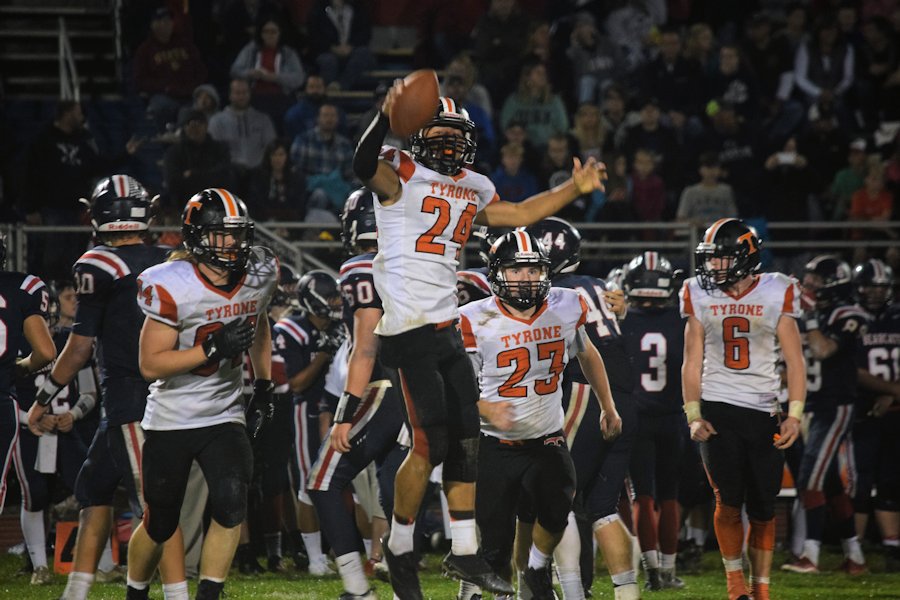 The 4-5 Tyrone Golden Eagle football squad will square off against the 4-5 Huntingdon Bearcats and its do or die for both squads. The winner will move on to the District 6 playoffs and the loser’s season will be over.

The Golden Eagles enter play on Friday with a 5 game losing streak and hope to get back into the win column for the first time in over a month.

Part of the problem for Tyrone this season has been the schedule, according to Head coach Jason Wilson.

“We’ve faced some really tough opponents and although we’ve been able to play tough against them, we’ve failed to put the ball in the end zone. Penalties have been a big factor in getting first downs called back and big plays. We need to clean it up,” said Wilson.

Last week, the Golden Eagles played their closest contest in a while, holding a very talented Penns Valley team to just 13 total points but the Eagle offense fell short.

Senior Zac Albright stared the scoring, racing into the end zone to give Tyrone a 7-0 edge in the first quarter. That would be all for the Eagles however as they weren’t able to capitalize late in the red zone last week. Two key interceptions towards the end ended Tyrone’s hopes of going home victorious.

The Huntingdon Bearcats offense, on the other hand, is coming off two monstrous performances wherein they put up at least 52 points in both. Last week against Central, senior quarterback Andrew Hudy passed for 187 yards for 4 touchdowns while also rushing for 2 touchdowns.

“[They have] a similar offense to us, they spread the ball around well, have a good downhill running back and they have two QBs that can run or throw,” said Wilson, “We need to tackle well and force them to drive the field.”

Another thing to watch out for is the Bearcat defense.

Last week, they held the Scarlet Dragons to a relatively low score of 18. Senior Andrew Finkle spearheaded the Huntingdon defensive with 5 tackles and 6 assists. Senior Jacob Wagner collected 5 solo tackles of his own as well as the Bearcats would go on to beat Central 52-18.

“Huntingdon has a very good defense that attacks and tackles well,” said Wilson, “We need to stay with our blocks, run hard and continue to take what we can get.”

This Friday night is Senior Night and there would be nothing better for the seniors than to clinch a playoff spot. The only thing that stands in their way is Huntingdon.

The game will be held at Gray Field Friday at 7:00 PM, be there early for the Senior Night festivities.