The Look Ahead: Eagles Set to Duke It Out on Homecoming Night 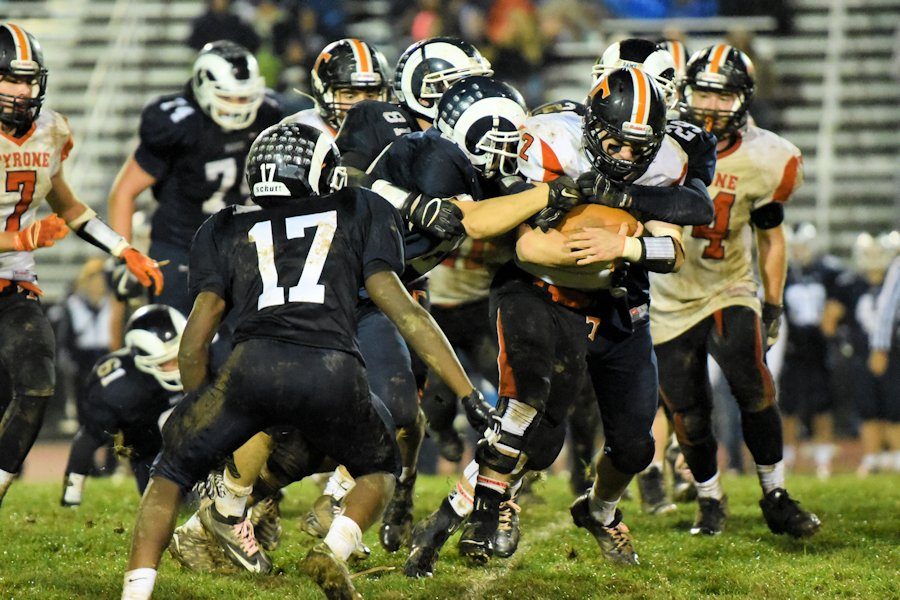 The 2-6 Tyrone Golden Eagles are set to duke it out against the 2-6 Penns Valley Rams on Friday.

The Golden Eagles showed up big time last Friday versus Hollidaysburg when against all odds they were able to keep the score tight at 14-7 going into the half. As fate would have it however, penalties and injuries would prove too much to overcome for the Golden Eagles as the Golden Tigers pulled away with a 38-7 victory.

The AA Rams of Penns Valley have had their hardships this season. Chestnut Ridge brutally destroyed the Rams last week 42-14 and this wasn’t even their largest margin of defeat. In week five the Huntingdon Bearcats dismantled Penns Valley on almost every facet of the game as the Bearcats were victorious 56-8.

Tyrone would like to make a final push to attempt to make it to the postseason and what better way to start that run than on Homecoming Night? The Golden Eagles’ season is dangling by a thread as they are severely in need of a victory and a loss would shatter Tyrone’s hopes of making it to the playoffs at all.

The Rams defensively have not been all that great this season giving up 40 or more points on five occasions. They are going to be big up front, similar to Hollidaysburg however they are troublesome. The Golden Eagle offensive should have no trouble moving the ball against Penns Valley on Friday night.

The Penns Valley offensive front had some good outings but it hasn’t been able to make up for their defensive woes this season. Bald Eagle, Central, and Huntingdon were all able to hold them within single digits but against the Punxsutawney Chucks back in week one and the Bellefonte Red Raiders back in week seven the Rams were able to shock many people.

The only two victories this season for the Rams were against Punxsutawney and Philipsburg-Osceola. That being said the Golden Eagles have only prevailed twice thus far as well. The Rams are much better than people give them credit for and deserve to be looked at as a serious threat.

The Golden Eagles need a little first half magic like they had last week against Hollidaysburg. If they manage to come out with the same level of intensity as last week, Homecoming Night will be one to remember. Fail, and Homecoming will not end up being such a great night.