The Look Ahead: Eagles Hope to Turn the Table on Bellefonte 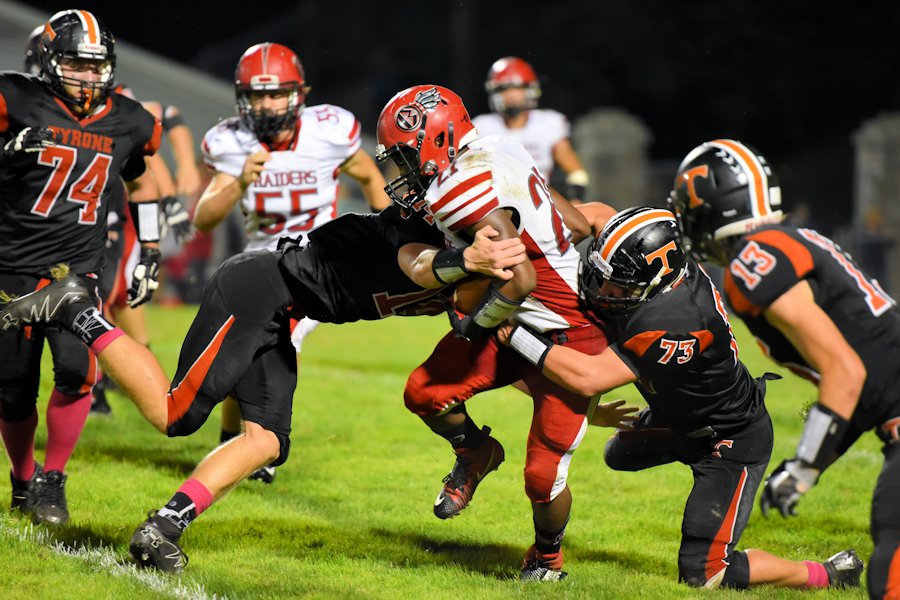 A hoard of Eagles making a tackle vs. Bellefonte last season.

The 1-3 Golden Eagles will be looking for revenge on Friday night, as their home loss to Bellefonte last fall was the low point of the 2016 season.  Success for both squads last week set the stage for this epic showdown.

Tyrone was a force to be reckoned with last week versus Philipsburg. The Golden Eagle offense was able to put up six touchdowns in the first half while shutting out P-O making the score 42-0 at the half. Philipsburg didn’t go down without a fight however, scoring 21 unanswered against Tyrone’s JV squad, making the final score 42-21.

Bellefonte, 3-1, has had a solid season so far, with the exception of the Huntington game a few weeks back. The Red Raiders are fresh off a thriller against Central Mountain, scoring a touchdown in third overtime to down the Wildcats 34-31.

Despite a difficult start to the season, Tyrone rebounded in last week’s clash with P-O. The offensive line took a step in the right direction having manhandled the Mounties.

The Bellefonte defense has been the weakness for the Raiders this year having given up 52 to Huntington. Even last week, the defense managed to give up 31 points to Central Mountain. If the Golden Eagles can expose this weakness, Tyrone will shine Friday night.

The Raider offense has been very aggressive up front. Bellefonte has scored over 30 points in three out of their four games thus far which has made up for their lacking defense. They typically run out of a spread pistol formation and this has been giving many defenders trouble.

Tyrone special teams was vastly improved all around and the defense, at least varsity-wise, was at it’s apex. If the Eagles can continue their offensive successes of last week, you better watch out.