The Cicadas are Coming! 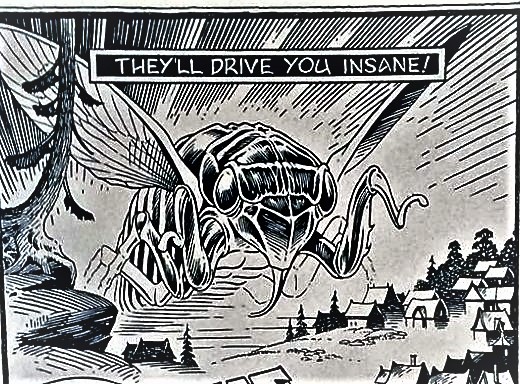 Screenshot of Sandy Plunkett's cartoon of cicada Brood V made for the Athens News.

After seventeen years of dormancy, Cicada Brood X will soon return to ravage a third of the nation, including Blair County, Pennsylvania.

Billions of these red-eyed monsters will crawl from the depths of the world and cause a biblical-sized storm across the east coast. Their cries will radiate through the heads of millions terrorizing them as they wait fully knowing they cannot stop the cicadas.

As the summer sun approaches the earth shall warm beaconing these pests from their seventeen-year exile. They shall crawl and slither from the underground in the cover of darkness. In golden robes, they shall march side by side in great haste.

They will ascend and take to the trees before the skies. They seek protection and vantage.

Nested to the trees the cicadas shall transform. They will abandon their golden robes for golden wings. Additionally, they shall be marked black to remind them of whence they came. Now they are free to take flight with the rising of the morning sun.

With a quintet of eyes, they shall scour the lands in search of youths whom they will drain their lifes’ essence from. The old and mature will not be spared from their crusade, but their vigor shall keep them living.

Once fueled by life the cicadas will sing. They will join together in a harmonious choir of deafening cries. Their song will grow as unbearing as the summer sun.

“The noise is awful,” said Nature Historian Sir David Attenborough before being attacked by a cicada.

Cicadas will swarm the lands until they can no longer endure the wrath of the sun that beckoned them to the overworld in a true act of irony. Their dying bodies will drop to the ground in tremendous droves. A short-lived moment of tranquillity will arise with the ceasing of their infernal racket. With millions of corpses on the ground, the air will sour with an aroma of rot.

This swarm is inevitable and there is not much that can be done to stop these underworldly beasts from taking to the skies. However, if you plant a garden with mature enough plants you might be able to persuade the cicadas to leave by enticing the arrival of the cicada wasp.

“They are not aggressive and do not have the nest-guarding instinct of honey bees and hornets. You can walk through areas where they are active without attracting attention,” said entomologist Lee Townsend of the University of Kentucky.

It may not seem all that desirable to allure a wasp to one’s home, but you do have a choice to make. You can either bear with the wrath of the cicada swarm chanting in ear-piercing melodies or you can put up with a tiny, helpful bee.

The cicadas are coming, are you ready?