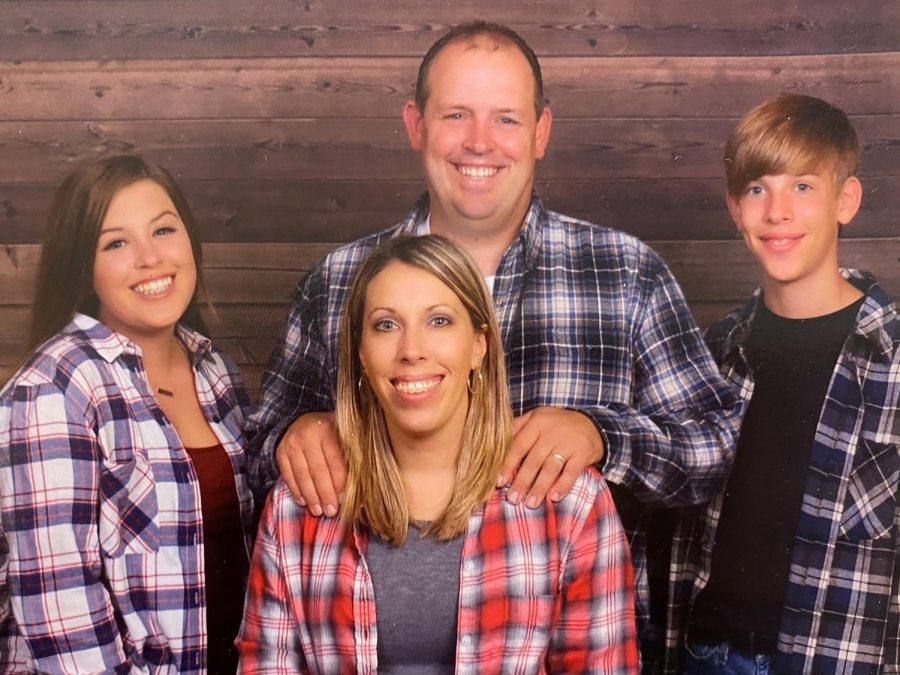 The Redinger family battled COVID this fall and while they have all mostly recovered, the experience made them recognize how important it is to do everything we can to keep others safe . (l-r, Jenna, Tracy, Justin and Jon)

For several weeks in December, Blair County was one of the top ten counties in the United States for new COVID cases, and while cases have dropped over the past several weeks, the virus is still prevalent in our area.

Unlike the early days of the pandemic when it was rare to encounter someone in the area who was personally affected by the virus, now it is hard to find people in Central Pennsylvania who have not been touched by COVID-19.

Tyrone social studies teacher Tracy Redinger, her husband, and their two children are one of the many Blair County families that battled the virus this fall.

Fortunately for the Redingers, they have mostly recovered and are getting back to their normal lives, but their experience is a reminder that even when the virus doesn’t take a life or result in hospitalization, it is a serious threat and something that should be taken seriously.

The first in the family to get it was their son, who became ill on October 21st.

“My mom called me on the way home from work to tell me that our son, Jon, was running a fever and hadn’t really gotten off the couch all day. So when I arrived home, I immediately took him to the pediatrician’s office,” Redinger said.

They found out that Jon was positive that Saturday. They immediately called everyone they were in close contact with and made sure that the necessary precautions were taken, and contact tracing was done.

Initially, the virus didn’t seem like it was going to be that difficult to deal with as Redinger, her husband, and her daughter were tested and came up negative.

“We originally all tested negative but the state told us to assume we were positive since we were living with a positive case, and it wasn’t two days after the test that my husband came down with it. He and Jon were both on the couch,” Redinger said. “That was just the start.”

Soon she and her daughter would start feeling sick and the entire family was COVID positive.

Redinger’s husband Justin, however, was hit the hardest.

“He couldn’t get off the couch without help. He held onto me as I walked him to different rooms in the house because he was so weak. And he battled the cough and chest congestion,” Redinger said.

Her son had a fever for 14 days, and her daughter Jenna stayed healthy for a while, but that wouldn’t last either.

While her husband and son were getting better her daughter started to come down with symptoms. Her daughter lost her sense of taste and smell, which still has yet to return, almost two months later.

Redinger was the last in the family to contract the virus, but when she did it put her down for several weeks.

“I had extreme fatigue and a week-long headache that wouldn’t relent. I couldn’t return to work until November 23rd,” Redinger said.

Luckily they were all able to stay home throughout their quarantine and no one had to be hospitalized. But because the virus affects everyone differently, it was a scary experience.

“Our first and foremost priority is to make sure our children feel safe and secure during a time when insecurity and fear run rampant,” Redinger said.

She tried her best to make sure her kids stayed positive. She wanted them to see that even when life goes the wrong way, you can still make the best of it.

They got hit during a hard time frame in the year, the holidays. They stayed at home and weren’t able to be with their family like they usually were, but they made the best of it.

“Jon’s celebrated his 13th birthday in December, but we told him we’ll try to have a party outdoors come June. It will be a 13 and a half year birthday celebration with the rest of the family and friends,” Redinger said.

For Christmas, they tried their absolute best to still keep their family traditions alive.

“Justin and I made sure to still pick out a real Christmas tree with the kids; we decorated our gingerbread houses, just like we always would,” Redinger said.

After dealing with COVID for a month it really made them aware that the illness is something that needs to be taken seriously.

They also realized how important people in their lives are and noticed how much they take them for granted.

“We were reminded how much our friends and family care about us when meals, gift cards, and groceries would show up on the porch. We knew we had these people in our lives, but how often do we take them for granted,” Redinger said.

Redinger cautions her students and others to be careful, take all precautions, and watch out for themselves and others.

“Wearing masks, not going out like usual, not visiting family like usual, etc. may seem like terrible inconveniences at the time, but I think it’s important to remember that all of these sacrifices we’re making are acts of kindness towards others,” Redinger said.

Although it was difficult for her family, Redinger knows it could have been so much worse.

“We’re empathetic to the families that are going through this and who are having a much more difficult time than we did. We also recognized how important it is to do everything we can to keep others safe,” said Redinger. “This isn’t something to take lightly! Not everyone is experiencing just cold-like symptoms.”