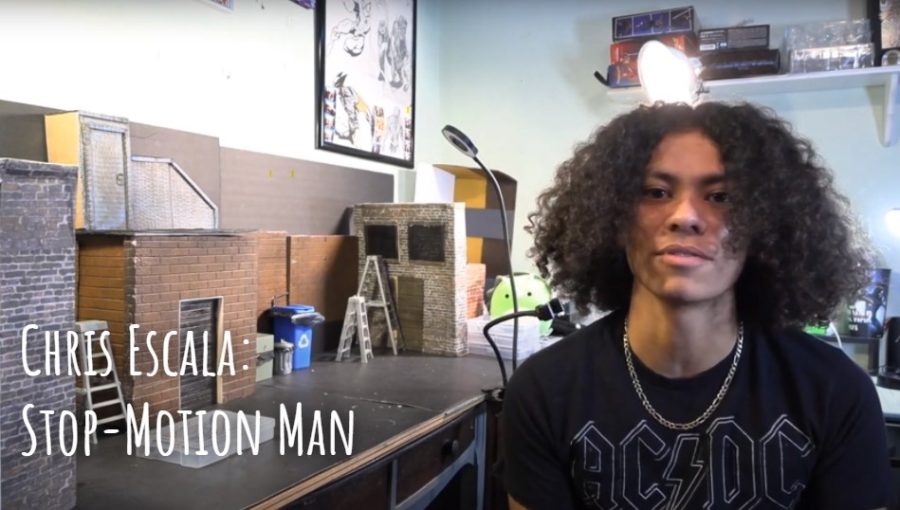 As he was scrolling through his stop-animation Tik Tok channel on his phone, a stranger in line behind him struck up a conversation by saying “Hey, I love that guy’s videos.” To which Escala responded, “Really? That’s awesome – that’s my channel!”

In just under six months, Escala has turned his childhood love of action figures, animation, and superhero movies into one of the most popular stop-animation accounts on Tik-Tok.

“It feels unreal to look at my phone and see 100,000 followers. I mean it all could be gone tomorrow, so it’s really humbling to have so many people genuinely enjoy some of the things I do right here in my room with such a simple setup,” said Escala.

Escala’s passion began in an unexpected way when he saw a few Marvel action figures for sale at a yard sale.

“This guy was selling a bunch of [action figures]. ImpulsiveIy I bought two of them and from there…it just kind of evolved,” said Escala.

Inspired by his favorite YouTubers, Escala set up a small studio set up in his bedroom and began producing videos using just his iPhone, a small tripod, a few ring lights, and his ever-growing action figure collection.

He also purchased and customized several background dioramas and props for his videos. Even the editing is done on his phone. He mainly uses three apps to edit his videos: Capcut, Splice, and Stop-Motion Studio Pro.

Most of the videos are only a few seconds long and take him about an hour or so to shoot and edit, but the longer ones can take several days to a week to perfect.

He uses several classic stop-animation tricks to add impact to his videos. For example, he will use small gauge wires that can’t be seen in the actual video to make the characters fly or float. The apps help to digitally cut things out of the videos and add sound and video effects.

In some of his videos, he faithfully recreates scenes from popular Marvel movies or other popular action movies like John Wick. In others, he creates his own original scenes based on the Marvel character’s personalities.

Stop motion animation is one of the oldest art forms in film. The first documented stop motion animated film in history was released in 1898. The genre was popular throughout the early days of filmmaking and rose again in the 1960s and 1970s with the still popular stop-animation Christmas specials Rudolf the Red-Nosed Reindeer and Santa Claus is Comin’ to Town. In the 1990s the highest-grossing stop-animation film of all time, Tim Burton’s A Nightmare Before Christmas, was produced.

Today thanks to the development of high-quality smartphone cameras and stop-animation apps, the genre is experiencing a renaissance by DIY filmmakers like Escala on YouTube and Tik Tok.

Escala is able to manipulate his figures to make very smooth motions with just his hands, ring lights, and backgrounds.

Tyrone art and video production teacher Eric Feather credits both Escala’s technical skill and his artistic eye for the success of his videos.

“I see incredible visual balance, the rule of thirds, I see him using push-pull focus, a variety of different shots, I mean what he’s really making is like a little movie,” said Feather.

Escala is also a skilled artist who adds great detail to his drawings. The patience necessary for creating detailed pencil drawings has served him well in his stop-motion film creations.

Escala’s collection of action figures has grown tremendously since last summer. He purchases many of them online and even does videos of him opening new figures he receives in the mail. He typically will use the new figures he gets in the mail in his next few videos.

Escala will occasionally follow a pattern with the popular DC or Marvel movies coming out. When Spiderman: No Way Home came out he made lots of stop motion videos with Spiderman that did really well in views and likes.

He is very good at portraying the less serious side of superheroes which gives his videos something you can chuckle at but you’re still impressed at the precise stop motion skill and effort put into all his videos.

Escala has only been posting for 6 months but his account continues to grow at a rapid pace with three videos at over a million views. He usually posts once every few days whether it’s opening a new figure or showing off his stop motion skills.

His family is very supportive of Chris’s hobby and thinks it will take him places if he continues to develop.

“I thought you were a nerd, like kind of a geek,” said Chris’s younger brother Andrew, “but now I think it’s cool because it’s such good quality.”

Chris’s parents Indy and Brian Escala think their son is on to something with the talent and patience necessary to produce the videos.

“I definitely think it’s a passion that will grow with him as long as he stays passionate about it because you have to have passion to sit there and move the figures bit by bit, it’s incredible,” said Chris’s dad, Brian Escala.

As for Escala, he is not yet sure what he wants to do after high school yet, but he is definitely very interested in studying filmmaking and digital video in college.

To check out his videos on Tik Tok, his username is christopher_escala.