Christine and Voyzey lead the way for the senior squad 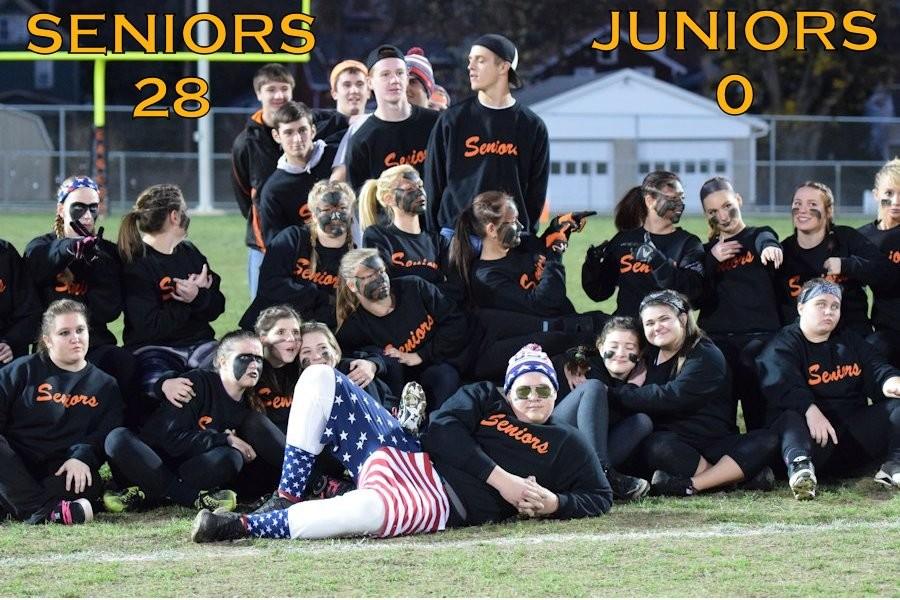 Expectations were high for the Seniors at the annual Powderpuff girls football game at Gray Field on Sunday.  The Seniors were confident and predicting victory all week and they did not disappoint, dominating the Juniors 28-0 for their second straight Powderpuff victory.

The game even got some local TV coverage with WTAJ sportscaster Jamie Baker joining the referees and captains of both squads at midfield for the coin toss.

“I honestly didn’t even know she was going to be there!” voiced several senior girls, “She took a selfie with us. That was the best part!”

The Seniors won the toss and chose to receive. Starting from their own 45 yard line, they drove down the field with several sweeps and outside powers by quarterback Finnley Christine and halfback Marlena Wagner.  However, the Seniors were unable to finish the drive and turned the ball over on downs at the Junior five yard line.

That’s all the Seniors needed as they scored seven plays later off of a Christine sweep to the left side. A successful two point conversion pass from Christine to wide receiver Erika Voyzey put the Seniors up 8-0.

The Juniors just couldn’t get anything going on offense and it didn’t take long for the Seniors to score another touchdown on the feet of Christine. Another converted two point conversion put the Seniors ahead 16-0 going into halftime.

After the break  the Juniors were able to put together their best drive of the game. Two runs by Kasey Engle and a 20 yard pass to Alexis Cannistraci put the Juniors in Senior territory.  Bu the drive ended on downs at the Senior’s 35 yard line.

After several punts from both teams, the Seniors advanced to the Juniors five yard line and Christine punched in her third touchdown of the night. This time the Seniors’ two point conversion failed, but they still led 22-0.

Both defenses played well in the fourth quarter as neither team scored until the last play of the game.

The Seniors lined up in an apparent running formation, and the Juniors stacked the box looking to stop them. Christine hiked the ball and lobbed the ball to a wide open Voyzey who scored easily, making the score 28-0 at the final whistle.

Spirits were high after the game as both teams appreciated the competition and had no hard feelings toward each other.

“I have so much respect for the Junior girls being so classy, [they] made the game a lot more fun,” said Senior quarterback Finnley Christine.

“Most of us don’t even care that we lost, we had so much fun just playing,” commented Junior Allison Hosko.

The Seniors get the satisfaction of graduating undefeated in Powderpuff and the Juniors can look forward to redeeming themselves next year.