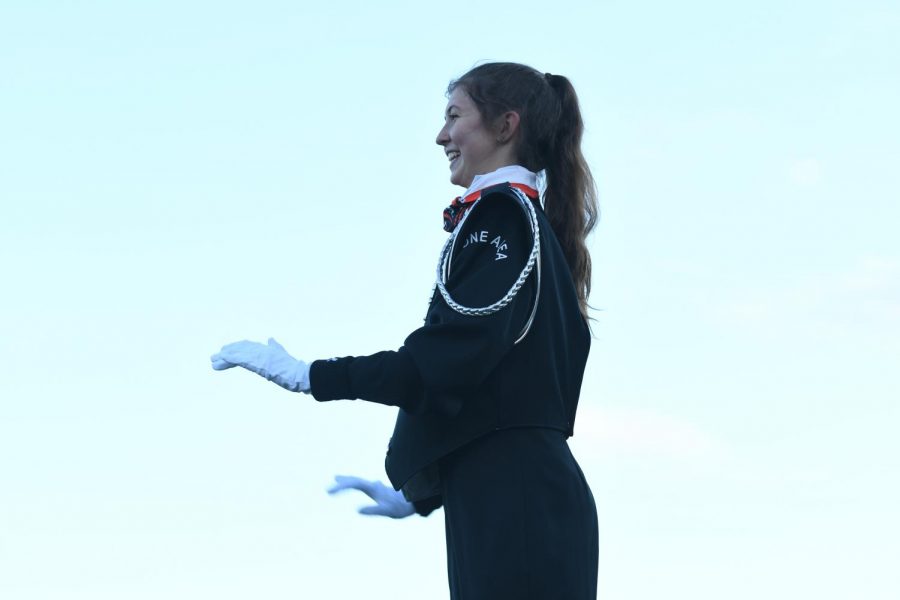 Whether in the band room practicing flute or singing in the auditorium, Tyrone senior Becca White always has a lot on her plate.

As drum major of the Tyrone Marching Band, White has been a key member of the band for many years. From Friday night football games to district band competition, POPS performances, and concert band, White has kept herself very involved musically at TAHS.

As a member of the POPS Extension show choir, she sings soprano.

In addition, White is a top student and is also involved in several other student organizations, including YAN and the National Honor Society.

“I take advantage of class time to get my work done. I like filling up my time with things that I enjoy. Sometimes I feel overwhelmed but I know that it will be worth it.” White said.

“Becca has contributed a lot to the band like great leadership, friendship, and being a great role model for the other kids,” Hock said.

Choir director Laura Harris thinks White is an inspiration to the other members of the choir.

“Becca’s positive personality and love of music are things that she has always shared with her fellow choir members,” Harris said.

With many achievements, White believes her greatest is being able to lead the marching band at competitions and games as the Drum Major.

“I think my greatest accomplishment is being able to be a drum major and conduct the marching band,” said White.

White plans to go to Penn State University Park campus next year and is leaning towards a major in mathematics.

Her dedication to music is still strong, and she is considering joining the Blue Band after her first year of college.

With White ready for the future, fellow POPS member, freshman Kaleigh Brodzina knows that she will be difficult to replace.

“I think that all the underclassmen will have to step up and be stronger after Becca is gone,” said Brodzina.

White’s senior year quickly approached and fellow bandmate, sophomore Laci Daniels, is going to miss her not only as drum major but also as her friend.

“I’m going to miss her humor, how she always helps other people and her dedication towards the band,” Daniels said.

Over the years White has made many friends and memories through both music and academics.

“I’ll miss seeing all my friends every day even just seeing them in the halls,” White said.

White’s favorite moments in high school are going to football games with her bandmates, which she’ll miss a lot.