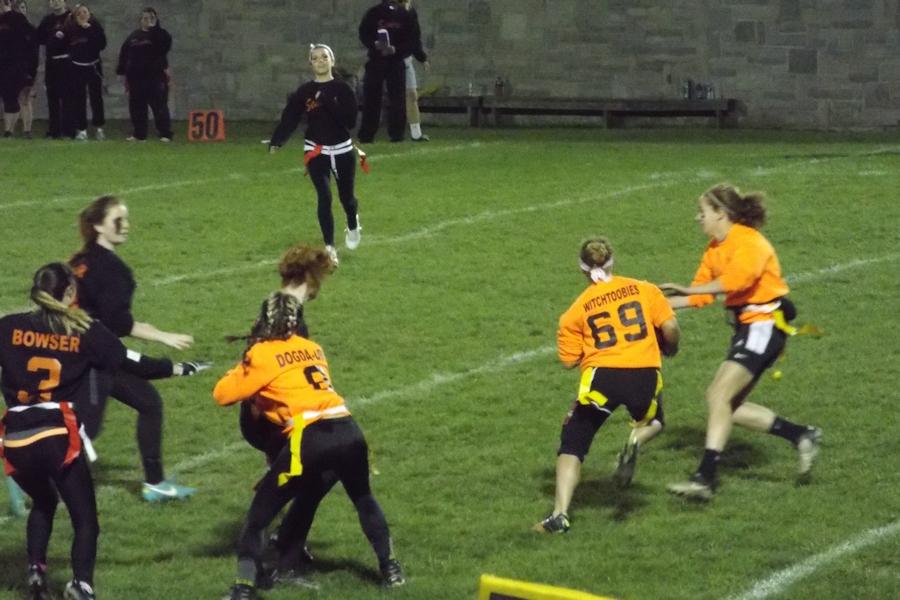 The Seniors defeated the Juniors 42-22 in the much anticipated annual Tyrone Girls Powder Puff game at Gray-Veterans Field on October 30, 2013.

Because the game is only held once a year, the stakes are high. Both teams spent a great deal of time practicing and preparing for the big game.

“We started as caterpillars and have [transformed] into charming butterflies,” said Michaela Diehl, one of the five Junior captains, emphasizing the change to herself and the team. “The most difficult thing for us has been remembering the plays,” she added.

The Seniors won the coin toss and began with the ball. Amazingly, the Juniors stole the ball on the first play of the game but could not score.

Just before the end of the first quarter Senior captain Jordyn Swogger scored a 42 yard touchdown. Swogger carried the ball for over 200 yards in the game.

The second quarter began with a touchdown by senior Emily Iuzzolino. The two point conversion was scored by Swogger.

For the Junior’s first score of the night, Micheala Diehl ran for a 60 yard touchdown.

The half ended with the score 14-8 in the Seniors favor.

After an interesting half time performance featuring the Tyrone Golden Eagles mascot Christian Cowher, the girls came out of the of the locker room fierce and ready to play.

Three more touchdowns were scored by the Seniors in the second half, all by Swogger.

The Juniors struck back with a touchdown scored by Megann Koegler.

In the fourth quarter Senior Lucy Raftery scored on a 13 yard touchdown run and Junior Amber Chamberlain scored on a 15 yard run.

“Too awesome,” “Lots of fun!” and “Very exciting,” were just some of the thoughts the Juniors gave about playing with their friends.

Although they suffered a loss, they still left with smiles on their faces.

“Go hard or go home,” said Senior Nicholette Diehl, “We just tried to do our best and practice twice as hard as the previous practice.”

Some of the girls even admitted to not knowing much about playing football.

“I learned that football is really harder than it looks,” said Hope Wilson, a Junior captain, “the football players taught us everything we know.”

After the fierce competition with one of her best friends, Jordyn Swogger admits the difficulty of facing her as an opponent. “It was really hard considering [Micheala Deihl] and I are best friends. We hang out every day.”

Although the Juniors suffered a tough loss, they are excited to compete again next year with the next junior class.

“I can’t wait for next year’s game! I have confidence that my team with pull out a win,” said Joe Steinbugl, one of the Junior coaches.