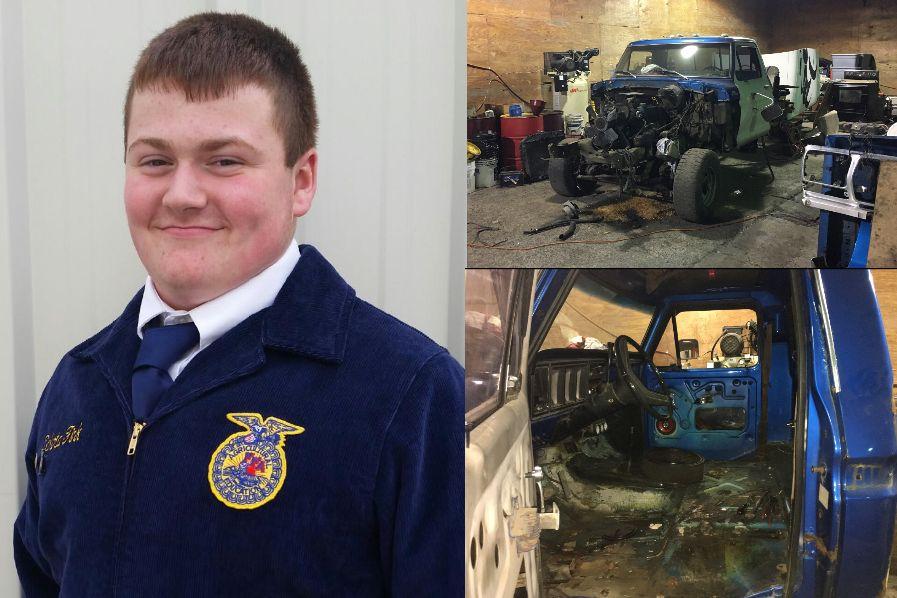 Peterson's project is still in progress.

This week’s SAE features Daniel Peterson, a junior at Tyrone Area High School. Peterson is the son of Donnie and Carrie Peterson. His SAE is based on restoring two pickup trucks, 1979 F-150s.

“I disassemble the trucks then fix or replace the parts that need repairing. Then I reassemble the vehicles,” explains Peterson. “My plan is to sell one and drive the other.”

In the past three years, Peterson has received many awards for his hard work in the Tyrone Area FFA Chapter. From competitions to achieving degrees, Peterson devoted a lot of time to receiving these following awards. In the 2015 Agriscience competition, he fed different types of apples to deer. The point of this was to study wildlife behavior and observe what types of apples suit their diet. For the 2016 AgriScience competition, Peterson teamed up with Zach Patterson. They used different substances on steel wool to observe the rusting. This is relative to Peterson’s hobby of fixing vehicles. The two worked together again for the 2017 AgriScience competition. They studied the different types of oil in small engines to determine which was most essential. Peterson received his Greenhand Degree at the 2015 Tyrone Area FFA Banquet; his Chapter Degree at 2016 banquet.  He also has obtained his Beef and Pork Quality Assurance certifications.

Aside from Agricultural Program activities and competitions in school, Peterson competed in local fair events and conventions. He participated in Tractor Driving at the PA Country Fair in 2015 and 2016. At the 2016 PA State FFA Convention at the Pennsylvania State University, Peterson teamed up with Zach Patterson once again and competed in small Gas engines