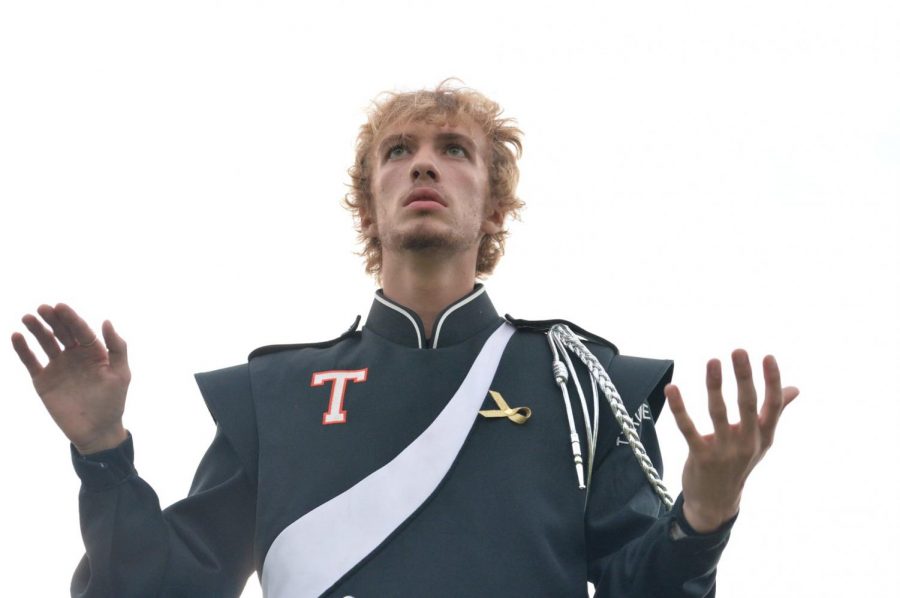 For the first time in school history, the music for the Tyrone Golden Eagle Marching Band’s halftime show was composed and arranged almost entirely by one of its own members.

The show, titled “Pulse: Rhythm of the Heart,” is the creation of senior Drum Major Jake Greene, with guidance from Tyrone Band Director David Hock and Percussion Instructor Rob Bonsell.

“The show idea came to me last year as a concept. I wanted to write a show exploring the idea of not only musical pulse, but also heartbeat,” said Hock. “I talked to Jake and he got really excited and asked if he could write something, so I told him yes. He came back a week later with a bunch of music that he had written.”

Hock knew that Greene had the talent and vision necessary to create the show, so he encouraged him to keep working on the project.

Greene started writing the music in April, and worked through the summer, sharing his progress often with Hock and Bonsell for inspiration and advice.

“We spent the entire summer writing, re-writing, and arranging the music to make it work for the marching band,” said Hock, “ [Rob and I] spent a lot of time with Jake to make things work. Even though we did a lot of editing and arranging to help make it work, the music is still written almost entirely by Jake, including all the instrument parts.”

For most people, writing something with exquisite detail with only a few months to create it would be very difficult, but Greene has been a creative and self-determined musician throughout his high school career.

“When it’s something you love, none of it feels difficult,” said Greene, “Challenging, yes, but in a way that gets you excited. I knew my final year of the band was coming up, and I wanted to make it special. I had played four shows before, and would always tell myself, ‘This would sound so much cooler if ….”.

Having those characteristics, along with his self-taught piano skills, convinced Hock that Greene was ready to take on such a big job.

“[Jake] has always loved music and has been very interested in how music is written and the techniques used for making complex musical ideas,” said Hock.

Throughout his years of playing, Greene has always noticed small details in the music and he’s always had the urge to critique. He was finally able to make that happen with this year’s show music.

Tyrone has a small marching band, so one of the biggest challenges for Greene was writing a piece that suited both the talents and limitations of a small band.

“Trying to write the biggest show I could with 11 wind players and 7 drummers [was hard], but it was fun attempting to play to everyone’s strengths and push certain people that I know can take the pressure to take the show to another level,” said Greene.

Greene’s fellow drum major, Kaleigh Brodzina, believes that playing an original show has made each musician in the band better.

“It feels a lot different. It makes me proud of the band. Jake challenged us and we are taking it on. It makes me feel that our band is so much better than people make it seem,” said Brodzina.

Floyd Hunter, a musician and Tyrone Band alumni, is proud of what his friend has created.

“I thought it was an amazing opportunity for Jake to showcase his talent and dispel a long-time perception that percussionists were just drummers and not truly musicians,” said Hunter. “The music that was written challenges the band and their abilities… it forces them to get better as a whole.”

Members of the community can experience Greene’s “Pulse: Rhythm of the Heart” Marching Band show before all home football games this fall and at their first band competition on Saturday, September 18 in Brockway.

For Hock, it is a special show because it was written by one of his students.

“I was unsure if it would work at first, but after spending a bunch of time editing the music, I’m confident that we have a great show this year. I am very proud of what Jake has accomplished,” said Hock.