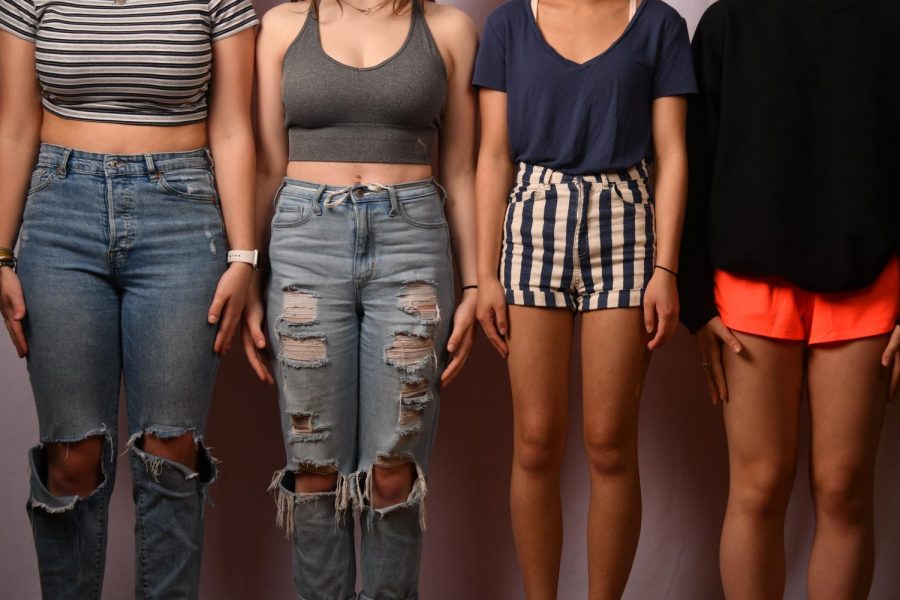 Four different students display different circumstances of being out of dress code.

By Vivian Sciarrillo and Ashlynn McKinney

The hot button topic of dress codes has been pushed aside for far too long. Why we don’t want to discuss it isn’t quite clear, but now more than ever is the perfect time to abolish something so confining and outright unreasonable.

Clothing can be an outlet for everyone, but especially for students growing into adulthood.

Besides, the school system needs to seriously reconsider what is most valuable, a student’s education or what a student chooses to wear.

The TAHS dress code is not as extreme as other schools but nevertheless, certain specifics need to be tweaked or eliminated altogether. As the times change, so must the dress code.

Anytime there are complaints made about what students aren’t allowed to wear, shorts is the first to be brought up. When the heat rises so does the length of pants, so it is not an unreasonable request to ask for a different rule on shorts.

If one has a short torso and long arms, good luck getting any cute shorts that don’t go down to your knees, and at that point he/she might as well just wear holey jeans.

Speaking of which, since when do holes above the fingertips distract people?

Unless someone’s undergarments are sticking out or if someone is clearly exposed, skin an extra inch above someone’s fingertips isn’t catching the eyes of passers-by.

The front of one’s thigh is significantly less distracting than someone being obnoxious in class, but no one is banning the rude students from interacting.

“I understand that the dress code is an established set of guidelines to ensure appropriate attire, but as societal views are changing maybe the dress code should too,” said Lucia Isenburg.

Normally it’s only one or two people who stare, and while that is unsettling, it’s those students who are the issue, not the people wearing the clothes.

Not to mention, it’s very clear who some of these so-called “peeping toms” are, and girls already do what they can to avoid them because even in sweatpants and a baggy t-shirt, the select few still look. Limiting the many to protect the few just seems illogical.

Speaking of illogical, why is it out of dress code for bra straps to show?

There is nothing distracting about a girl’s bra strap showing. If anything, it makes most people feel comfortable knowing that a girl is wearing one. It seems as if there would and should be much bigger issues at hand than if someone saw a simple strap.

Most times when a bra strap is showing that person has a tank top on. Tank tops pose another issue as well, not only for the girls but boys as well. Girls have a hard time finding adequate things to wear while still maintaining a sense of style. It just doesn’t seem like people are distracted, much less “turned on” by shoulders.

As for the guys, the reasoning why they cannot wear tank tops at all also doesn’t make a ton of sense. If the school is worried about being unhygienic then they should also mandate that students must take a shower everyday to maintain hygiene, and that would never happen. Sure the hair may be kinda gross but people really shouldn’t be looking at it, not that they’d really want to look anyway.

The dress code does nothing but hold people back and prevent them from wearing clothes that can allow them to express themselves.

Plus, doesn’t it get annoying for teachers to stop class to comment on the clothes someone is wearing.

The truth of the matter is, if we as a school abolished the unnecessary points of the dress code, school would be a much better place and it would make students feel more comfortable and accepted in school.