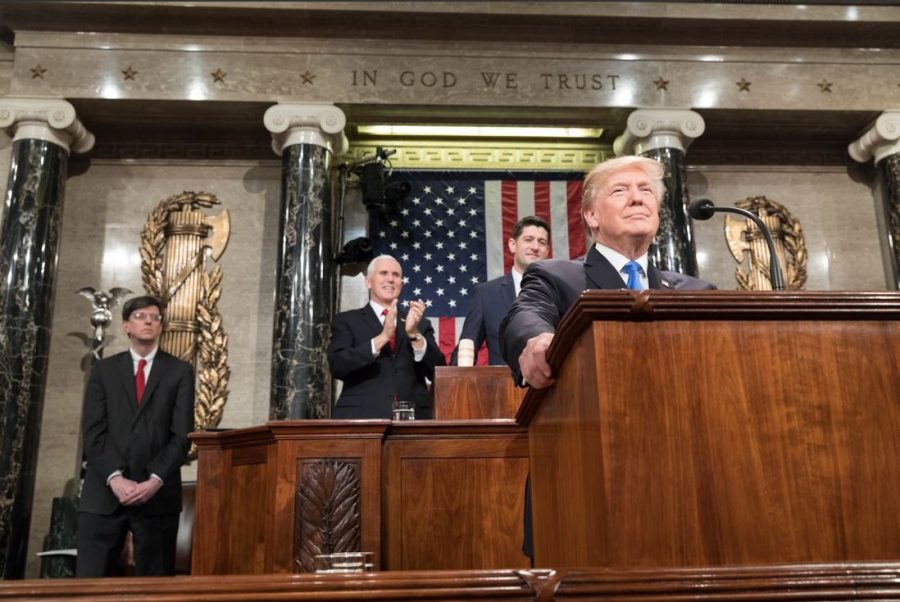 Donald Trump giving his first State of the Union Address.

The first year of the Trump Presidency has passed. In this time-frame, the President has seen his approval rating wane while the Republican-controlled Congress has struggled to agree on any major bills except a tax cut that goes mainly to corporations and the very wealthy. In the wake of this, President Donald J. Trump gave his first State of the Union Address last Tuesday night.

Since Donald Trump took office, it is true that the economy has been booming. Trump claims that he is the reason for this phenomenon, however, the truth is that the economy was already trending upward during Obama Administration. Instead of passing his own agenda, Trump likes to claim the better economic numbers inherited from the Obama Administration for himself, while attempting to completely abolish all of President Obama’s more controversial decisions.

On several occasions in his State of the Union Address, Trump proposed that the two major American political parties should come together.  However, his comments and actions throughout this past year do not back up this rhetoric. Donald Trump’s beliefs do not always line up with that of traditional Republicans. What Donald Trump should really be worrying about is aligning himself with his own party before he tries to unite both the parties.

During the Address, Trump also told stories of many courageous acts of heroism. While this was a good aspect of his speech, the President failed to touch upon the average working-class American, with the exception of two small business owners from Ohio. Though the heroic tales were very inspiring, the only stories that I could relate to were the ones about the small business owners.

Another point that President Trump made last Tuesday night was that we should get all the countries in the world together to destroy all nuclear weapons. The President takes a step in the right direction here. Just as quickly as he builds himself up, he brings himself back down by claiming that we should construct more nukes until we reach that goal.

Donald Trump also failed to mend racial wounds by continuing his verbal assault on the Mexican government.  He chided them for “sending” their criminals across the border, and he claimed that we should build a wall to block out our neighbors to the south. In reality, a southern border wall will tarnish our reputation abroad and cost us billions, if not trillions, of dollars in tax money. Former two-term governor of New Mexico Gary Johnson once said that a bigger wall will only produce deeper tunnels and taller ladders.

Donald Trump’s first State of the Union Address touched upon several positive aspects of his presidency, such as a strong economy and brave Americans. However, the President failed to bring the two parties together and also failed to calm tensions on many important issues, namely the Russia investigation and his hawkish foreign policy. Donald Trump’s first year in office was definitely combative; only time will tell if, in year two, we will see more cooperative governance.