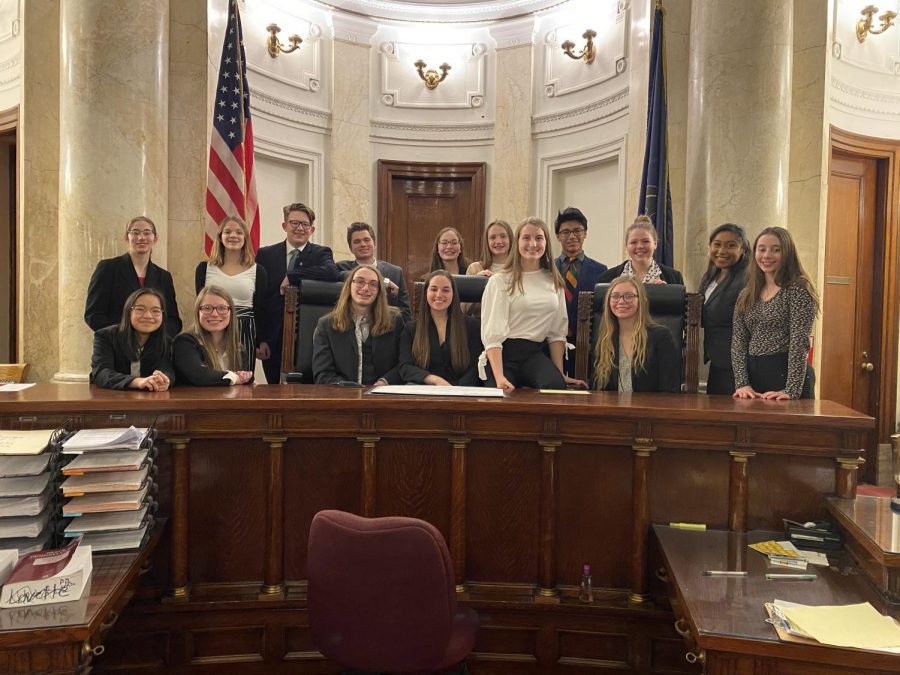 The Mock Trial A team at the Cambria County Courthouse last season.

The Tyrone Mock Trial team is back in session and looking to grow its team and work hard to win its cases this year.

The team will have an informational meeting after school in room 226 from 3:15 to 4:15 on Wednesday, November 18 for students in grades 9-12 interested in participating.

Pennsylvania’s Mock Trial Competition, sponsored by the Pennsylvania Bar Association, gives students from across that state the opportunity to play roles as lawyers and witnesses in simulated civil and criminal cases before actual judges and panels of juries.

“Mock trial provides the opportunity to work together as a team, create very close friendships, and analyze interesting cases all while portraying a unique character,” said Emily Dale, who was on the A-Team last year and portrayed the plaintiff witness Sloan Atanasoff.

In response to COVID-19 this year’s competition will be held virtually on Zoom. While this is not ideal, it will keep the participants safer and will decrease the chances that it will be canceled due to health concerns.

The jury in the trials will still be made up of local attorneys and the case will be presided over by Pennsylvania judges.

The Mock Trial Competition consists of one case as the plaintiff and one as the defense. If you perform well at those two trials, then your team can move on within the competition. Each year, the winning team goes on to represent Pennsylvania in the national competition.

While the club mostly focuses on the law, you do not have to have an interest in being a lawyer or going into the criminal justice field in order to join. The Mock Trial team is open to any freshman thru senior who may be interested.

“You should join a mock trial because it truly is more fun than it is work,” said Mikenzie Weaver, who was an attorney on the B team last year.

The competition is a fun way to give students thinking skills to out-think or out-argue their opposing team. The club may also help with one’s public speaking abilities as a witness has to remember their statement in order to answer questions in their direct and cross-examination. As a lawyer, you get the skills of presenting in front of a group of people while also trying to clearly state your team’s opinion in an argumentative way.

The group would like at least 8-10 members in both of the teams, so any new students interested are strongly encouraged to give it a try.

With last year’s B-Team only consisting of six members, it was harder for the witnesses who had to remember two different witness statements and lawyers who always had to be on the top of their game and prepared to object to false information from the opposing team. An increase in the number of participants would improve both teams in many ways.

The team practices two days a week and on some Saturday mornings. They usually attend two regular trials along with the annual Pitt Mock Trial Tournament at the University of Pittsburgh and the Blue and White Classic Tournament at Penn State University.

The Pitt tournament usually takes place in the span of two days where the team competes against some of the top Mock Trial teams in the state.

Due to the coronavirus outbreak, the Pitt tournament will most likely be virtual this year. The Penn State tournament takes place on a weekend with two trials each day, but it hasn’t been confirmed if the tournament is still on for this upcoming year.

If interested in signing up for the team, come to the meeting on Wednesday after school. If you cannot attend the meeting, visit Mr. Cammarata in room 226 or 230. He will answer any questions and give a copy of this year’s case.