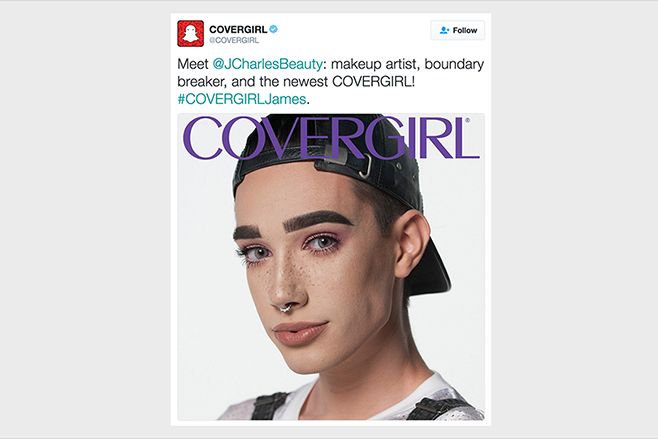 In October 2016, Cover Girl went out on a limb and sponsored their first ever male spokes-model. At just 17 years old, James Charles life changed forever when he got the call. It was only one year prior when he first picked up eyeliner and tried it for himself. He described using makeup to be ‘natural’ to him since he had done others’ hair and makeup before. His fame rose from his tutorials that he posted on YouTube.

Others have since been inspired by his originality and boldness. Just yesterday, Manny Mua is another male who posts makeup tutorials on YouTube and has thousands of followers and fans, was hired by Maybelline as their newest model and spokesperson.

Many of my friends and myself included, look up to these videos for ideas and makeup tips. These two men do their makeup better than I ever have and I have many more years of experience.

Although many men who wear makeup are gay, there are also heterosexual men who choose to wear makeup every day.

Does it bother me? Absolutely not. Who are we as a society to judge someone who does something to make them happy?

I see woman all the time with their hair cut short, with baggy pants on, and loose t-shirts. Notice how something is never said about them being less feminine.

I am all for self-confidence. If a man wearing makeup makes him feel happy… then make sure those lashes are full and thick!

Men and makeup actually have a long history.

In the early days of the theater, woman were not involved in plays. Therefore, if there was a woman’s part, a man had to not only dress up as a lady but get his face made-up as one too.

KISS, a highly successful rock band that formed in the 70’s wore makeup daily. Although they are known for the legendary face paintings, off stage they still wore black eyeliner. This is a trend that followed and is still around today. Many male ‘rockers’ will apply the eyeliner to give them a more grunge look. They might not be in a full contour and highlight, but the concept is still the same.

Actors since the beginning of film have worn cover-up and concealer. This was used to mask their blemishes from being seen on camera. Newscasters will often have a ‘prep session’ before airing to make sure that their face is camera ready. Highly televised events, such as presidential debates or the Grammy’s will require their males to have at least cover-up on so they’re ready for the camera.

Why all of a sudden have views changed? Yeah, there might be a little lipstick and some contour added, but just because there not doing it for the public’s eye doesn’t mean they should be treated as less than human.

No matter of your viewpoints, just remember that they’re still human just as we are. We have no place to judge those who are different than us. No matter what topic, I feel like this is something we all struggle with.

I challenge those of you reading this, to understand things from their point of view. Happiness is something we all deserve, no matter how you choose to express it.