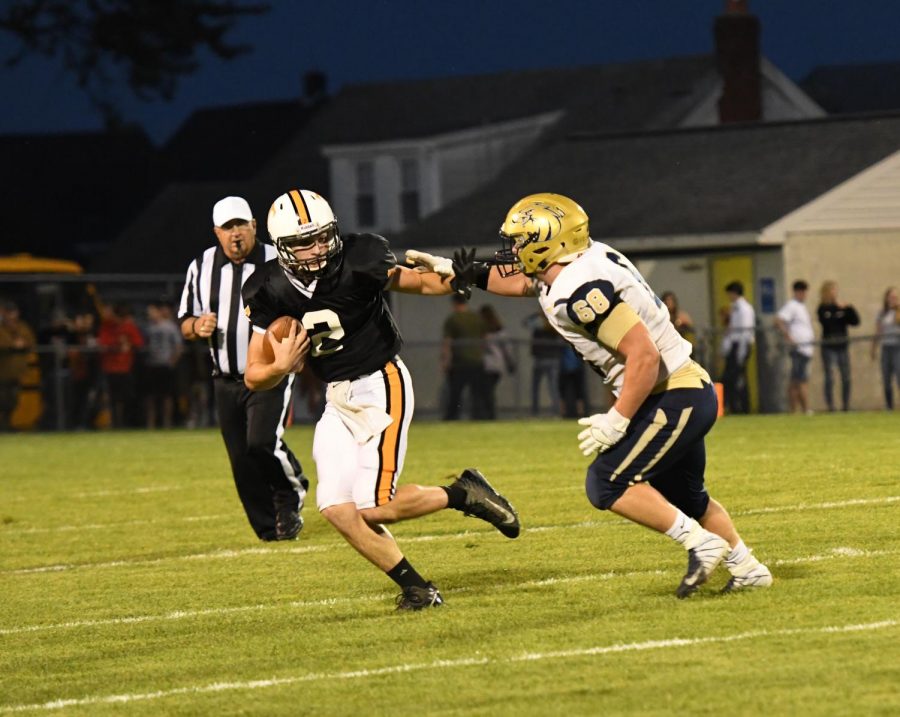 After a thrilling 51-14 blowout win over the Huntingdon Bearcats, the 2-0 Tyrone Golden Eagles travel to Bald Eagle this Friday to take on the Eagles (1-1) on their home turf.

For Tyrone, this is hopefully another win to mark on their “revenge tour.” The Golden Eagles have already taken down Bellefonte and Huntingdon, two teams that beat Tyrone handily last year.

This is another big game for Tyrone that will require quick and physical play if they want to improve to 3-0 and stay on top of the Mountain League.

Tyrone and Bald Eagle have been on somewhat parallel paths so far this season.

Both teams have only seen the Friday night lights twice so far due to missing games against the Clearfield Bison, a team that was shut down for two weeks due to COVID-19.

In week one, the Bald Eagle lost to the Central Scarlet Dragons 33-9, while the Golden Eagles defeated Bellefonte 21-14.

Regardless of their record, Bald Eagle is a force to be reckoned with and has been for the past several seasons. BEA are back to back returning district champions and have trumped the Tyrone Golden Eagles since 2017, most recently beating Tyrone 31-0 at Gray Field in 2019.

Bald Eagle’s offense is tough, but also different than the teams Tyrone has faced so far.

Their lineman are average sized, but are quick and hit hard. The offense relies heavily on their passing game to drive down the field, meaning Tyrone must have an effective pass rush to force Bald Eagle quarterback Garrett Burns to scramble and commit errors.

Through the air against Huntingdon, Burns was 15 for 31 for 266 yards. He notched two touchdowns and one interception against the Bearcats defense. The average passing completion went for an impressive 17.7 yards per completion.

Besides the pass rush, another key decider of this game will likely be the play of the Golden Eagle secondary, which hopefully can contain BEA’s passing game.

Expect a game in which the team who shuts down the other’s offense, primarily the passing game, will win.

Like all games, the fronts of the offensive and defensive line will define the game and get the win for their team.

The Eagle Eye will not be able to stream the game due to it being played in Bald Eagle, but WTRN will broadcast the game via radio. Kickoff is at 7 pm.