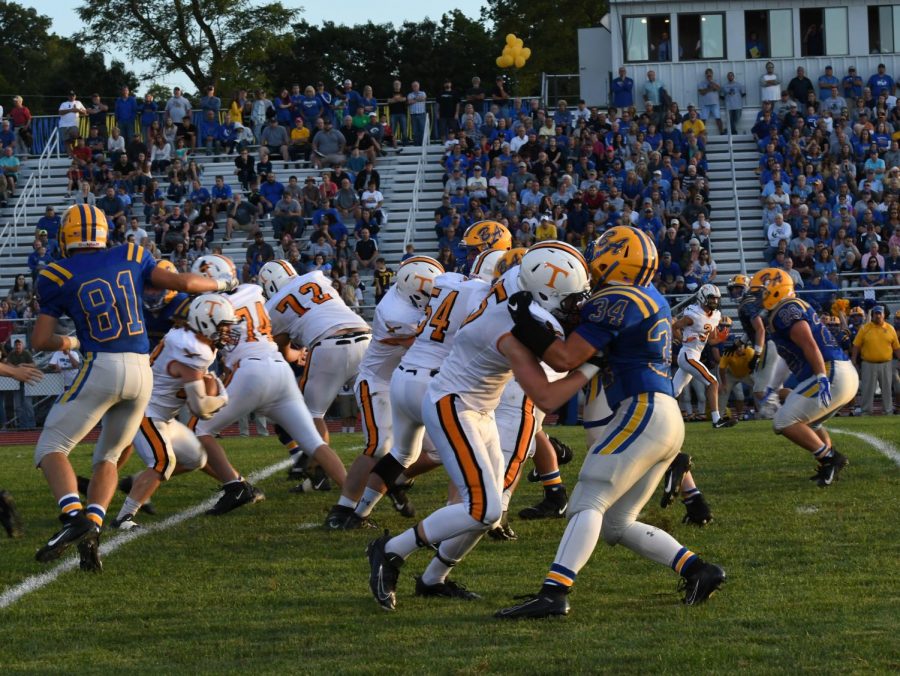 After a disappointing 17-14 loss to the Central Dragons in the District 6 championship, the Tyrone Golden Eagles look to end their season on a high note with a win against the rival Bellwood-Antis Blue Devils in the annual Backyard Brawl game.

Due to the delay in the start of the season this year because of COVID-19, the Golden Eagles did not think they would get a chance to play the Blue Devils this year.

However, with both teams being eliminated from the playoffs last week, the stars aligned and the Tyrone and Bellwood athletic directors were able to schedule a 2020 edition of the annual game.

While he would rather be coaching the team into the state playoffs, Tyrone Head Coach John Franco is excited that his team will get the opportunity to have a true season finale game.

“I think it gives us closure, and you don’t always get that. When you make the playoffs it is a great thing to make the playoffs, but the finality of not making it all the Hershey never gives you the closure of having a last game. The fact that we know it’s the last game of the year, and the fact that we are playing a rival in Bellwood makes a good season ender that you don’t always get,” said Franco.

The Blue Devils have had a similar storyline to the Golden Eagles thus far in the season. Both teams went undefeated all the way up to the second round of playoffs, where Bellwood lost 29-0 against Richland.

There is a trophy for this year’s game, as there has been for a while, that is currently hosted by the Blue Devils due to them winning the Brawl in 2019. If Tyrone can secure the win, they will bring back home the trophy and display it once more.

The Blue Devil offense is run-heavy and relies on big playmakers like Nick Plank and Zach Mallon, both running backs, to win the game.

Interestingly enough, Mallon just needs 99 yards to achieve 1000 on the season. Tyrone looks to make sure it doesn’t happen against their defense.

Through the air, the Blue Devils have only thrown a modest 69 passes in 7 games. Sophomore Zach Pelligrene completed 37 of those passes for 10 touchdowns and 3 interceptions, averaging 11.3 yards per completion.

The game will be won through Tyrone’s run defense. If the Golden Eagles can shut down the more dynamic part of their offense and make them uncomfortable because they have to throw, this game could be all Tyrone across the board.

Offensively, it must be the opposite for the Golden Eagles. They need both sides of the playbook, rushing and throwing, to be able to overcome the Blue Devils tough defense.

Overall, Tyrone looks to avenge their 2019 loss after a game-winning touchdown gave the Blue Devils the trophy last fall.

The game will be streamed via the Eagle Eye YouTube channel. Kickoff is at 7 pm.