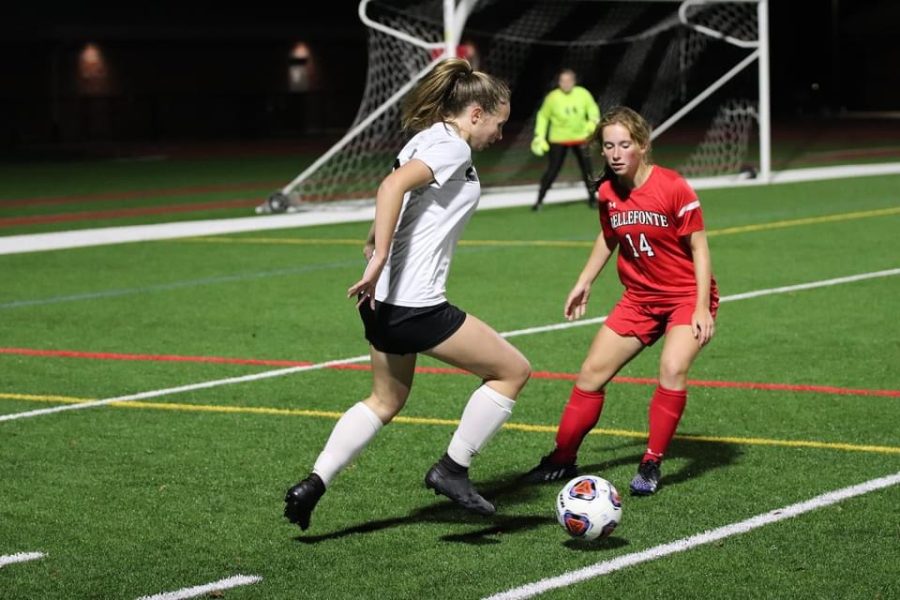 Junior Eliza Vance looking to take a shot at the goal.

Keeper Rayann Walls made her first shutout of the season Tuesday, September 28th, in a 5-0 Lady Eagles victory over Bellefonte.

“It feels amazing to finally get that first shutout in after a shaky start to the season,” said Walls.

“As a team, we played beautifully together and it felt amazing to finally come back after our district playoff loss of a golden goal to them and then beat them 5-0,” continued Walls.

Within the game, Walls made four saves, and juniors Chloe LaRosa and Eliza Vance both scored two goals. Junior Avalyn Moore also scored a goal and had an assist while LaRosa and Bellwood senior Sophia Nelson both added assists.

“I feel like we really came together as a team this game and it really showed our improvement through the season,” said Vance.

The game began with Tyrone dominating possession of the ball and taking several shots on goal from the time the whistle blew. Only two minutes into the half, two corner kicks were taken by Tyrone, but neither one could make their way into the net.

Moore scored the first goal of the game after a pass from LaRosa led her to the right corner of the goal. Moore saw LaRosa dribbling up the right sideline and started to crash towards the net. A perfect cross was made by LaRosa that landed right at Moore’s feet. Moore, being right in front of the goal, was able to take a one-touch to tap the ball into the bottom corner of the net.

The half ended with Tyrone having a one-goal lead over Bellefonte. The Lady Eagles knew they could beat Bellefonte if they kept up their hard work and continued to connect passes in the midfield and Bellefonte’s defensive end.

The second half started off fast with Tyrone dominating possession of the ball. Within two minutes of the half, LaRosa broke through the defensive line and took a shot on goal that bounced back off the keeper’s hands. LaRosa was then able to dribble around the keeper and shoot into the open net.

Tyrone continued to take shots on Bellefonte’s goal, and Vance made her first goal after a shot from Nelson hit the goal’s right post. Vance was then able to follow Nelson’s shot and score in the corner of the net.

Later in the half, Vance scored her second goal after a pass from Moore led her to the right side of the goal. Tyrone’s final goal was scored by LaRosa with an assist from Vance. Vance was able to cross the ball to LaRosa from the midfield, and LaRosa was able to take a few touches towards the net and score.