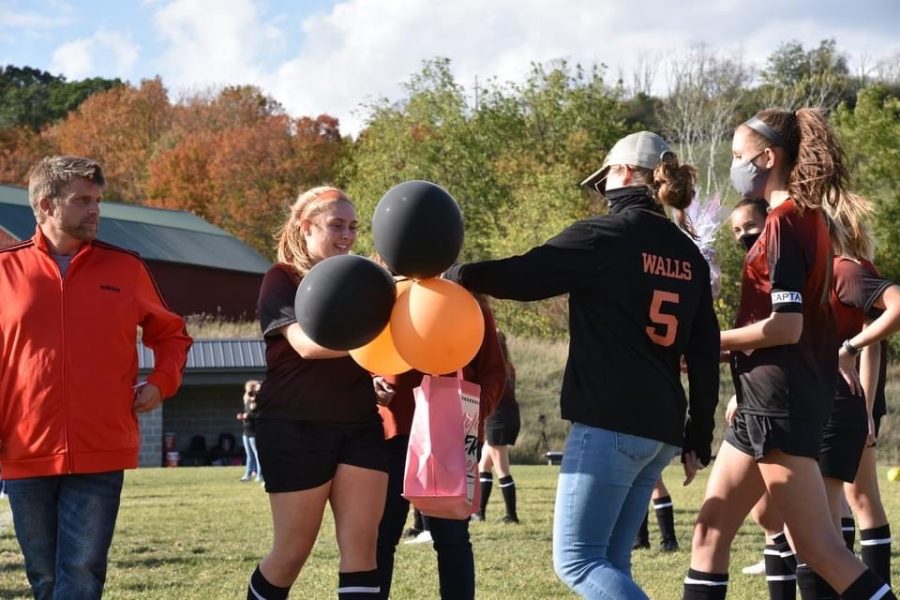 Kendall Markley was the only senior on the Lady Eagles varsity soccer team this season.

The Lady Eagles won a 6-0 shutout game against Philipsburg Osceola Mounties on Wednesday, October 7 on Senior Night. Tyrone’s first two goals were on the board in the first five minutes of the game.

“It was awesome to get a win on senior night. For all four years that I played on the team, we haven’t won on our senior night,” said senior Kendall Markley.

Tyrone started out strong with the first goal being shot by sophomore Eliza Vance in the third minute of the game. After a corner kick was given to Tyrone on the right side of the field, sophomore Avalyn Moore took the kick and laid the ball in front of the net. Philipsburg’s goalkeeper went to scoop up the ball before it was able to be kicked in the net but was unable to keep hold of the ball. Vance was able to take a one-touch to the lower corner of the goal as she crashed the goal during the corner kick.

The Lady Eagles then stormed Philipsburg defensive end again thirty seconds later and were able to make their second goal with a shot from senior Kendall Markley after a pass from Moore.

Tyrone defense was able to pass the ball upfield where the pass was connected to Moore. Moore was then able to drop the ball to Markley who was able to lift the ball over Philipsburg goalkeeper and hit the back of the net.

Sophomore Chole LaRosa followed with a goal made a minute later after a pass from Markley. The last goal of the first half of the game was made by Markley in the 16th minute. Tyrone left the first half with a 5-0 lead over the Mounties.

Coming back after halftime, Tyrone continued looking for the net but wasn’t able to score on any of their shots until freshman Lainey Quick passed the ball to sophomore Alyson Partner who was able to take a shot from the left side of the field and hit the net.

The game ended with a 6-0 shutout win for Tyrone and junior Jaylee Shuke posted her first varsity shut out. Senior Kendall Markley made two goals on her senior night, which helped Tyrone secure the win.

“The team has been so great this year! They have been working so hard against some very difficult teams, and our record is showing it. We have lost only 4 games with 3 of the 4 games losing by 1 goal,” said Markley.