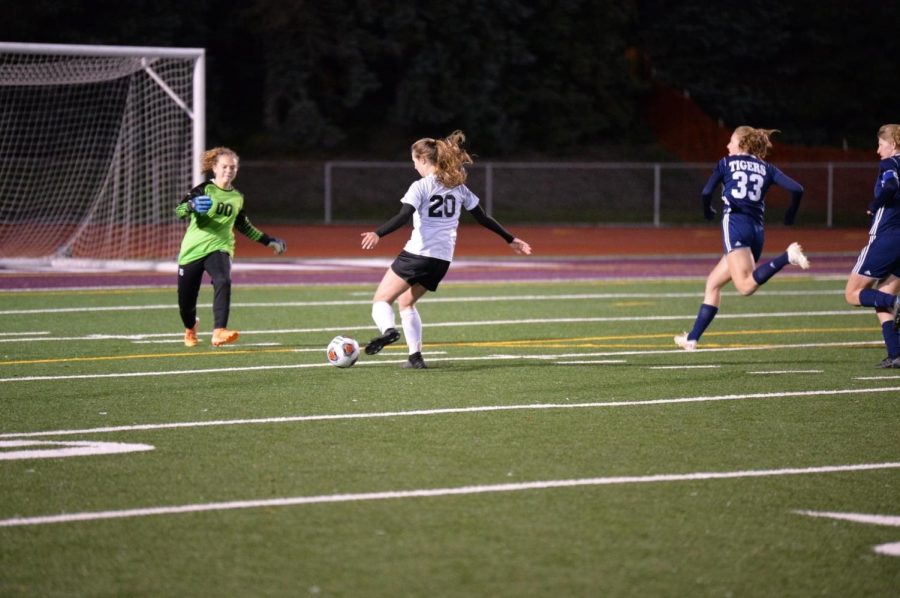 Junior Eliza Vance taking a shot during the championship game.

Tyrone outplayed Hollidaysburg for much of the District Championship match but was sent home with a 2-1 overtime loss.

“I was really hoping for a win but I am so unbelievably proud of how far this team has come. This is the closest we’ve ever come to beating Hollidaysburg but I still consider it a win in my books,” said senior Mackenzie Latchford.

The Lady Tigers won the last five consecutive District 6 titles so Tyrone knew that the game would not be an easy one.

Junior Rayann Walls was outstanding in goal, making twelve saves. The offensive end took eight shots on Hollidaysburg’s goal. On the other side of the scoreboard, Hollidaysburg took fourteen shots on the net while they only saved seven shots made by Tyrone.

The Lady Eagles had played against Hollidaysburg two times throughout the season and knew what they had to do to win.

In the first half of the game, Hollidaysburg took possession of the ball for the majority of the game. Although Hollidaysburg attempted to pass balls through Tyrone’s defensive end, they held strong and stopped all the balls from entering the box.

Shots were taken by both teams but none were able to make their way into the net until the last five minutes of the half.

With four minutes remaining in the first half, Hollidaysburg’s junior Abby Bell dribbled up the right side of the field and passed the ball for Stoehr to shoot. The ball bounced off one of Tyrone defenders, but Stoehr followed her shot and scored in the bottom corner of the net.

With only a few minutes left, Tyrone struggled to gain control of the ball for another shot, and the half ended in a 1-0 Hollidaysburg lead.

The Lady Eagles came out strong within the second half and headed straight for the goal.

Five minutes into the half, a foul was called within the box when junior Eliza Vance attempted a shot on the net, and Hollidaysburg’s goalkeeper went out of the box and tripped Vance. Since the play was considered dangerous play, Hollidaysburg’s main keeper was presented with a red card which left her team laying a player down for the remainder of the game and their backup keeper in the net.

Since the red card was given to the opposing team, Tyrone was given a penalty kick. Bellwood senior Sophia Nelson took that opportunity and scored in the bottom corner of the net and tied up the game.

The remainder of the game was highly competitive with both teams fighting to take the lead. Although many shots were taken on both goals, the keepers and defensive end held strong. The 1-1 tie led both teams to overtime.

In overtime, Tyrone immediately took the ball to the net but missed their attempted shot. A handball within the box led to another penalty kick for Tyrone, but the now prepared keeper would not let the ball enter the net.

A bad pass made by Tyrone led Hollidaysburg to intersect the ball within the midfield and dribble the ball upfield. Hollidaysburg’s senior Natalie Despot took the ball up the right side of the field and crossed the ball for Stoehr to shoot. Stoehr was then able to score into the top corner of the net.

Tyrone played one of their hardest games and came the closest that they have ever come to beating Hollidaysburg. Tyrone did not win, but they still made sure to give Hollidaysburg a run for their money.

“The game was very emotional for all of us, especially us seniors because it was our very last game of our high school careers. We worked so hard all season to get to the district championship,” said senior Lindsey Parks.

With many key players out during the district game, the Lady Eagles soccer team is hoping to make it to the district game again next year and hopefully make school history by bringing home the first-ever girls soccer championship trophy.

Next year, Tyrone junior Chloe LaRosa will return to the field. Before her injury, LaRosa was one of the top scores for Tyrone. The Lady Eagles will also gain freshman Briley Campbell, who was out all season due to injury, along with many well-skilled incoming freshmen.

Although the Lady Eagles did not get the outcome that they hoped for, they still managed to make school history by being the first girls soccer team to make it to the District 6 game. Tyrone did not get to end their season the way they hoped for, but they did show how they could still put up a fight and play hard without the team being at their full potential.

“We made history by being the first girls soccer team to make it to the playoffs. This team has always been really close and I think this game just made us stronger,” said Latchford.