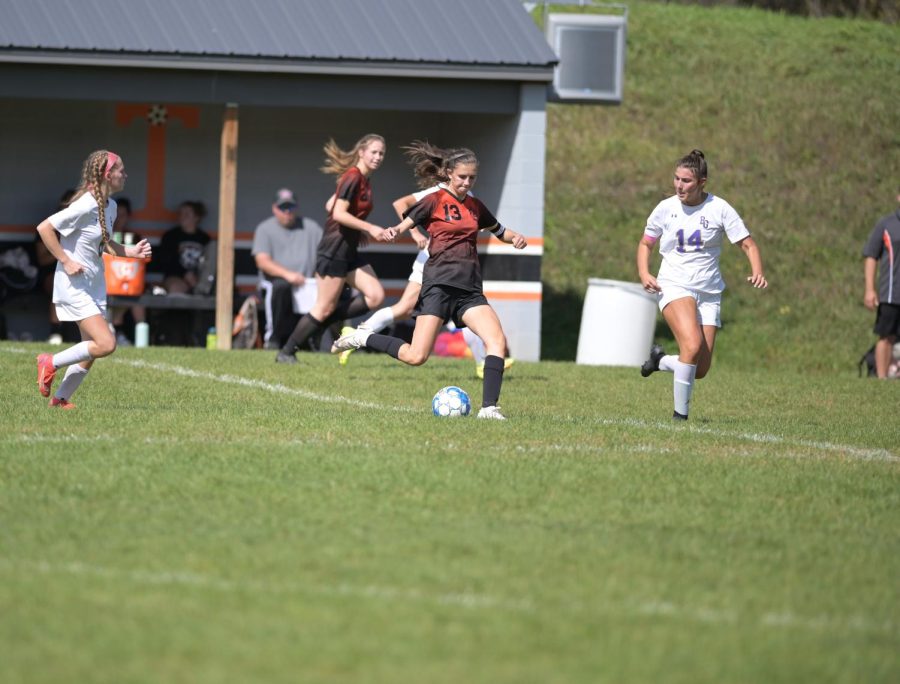 Bishop Guilfoyle dominated the first half of the game with the ball mostly being in Tyrone’s defensive end. The Lady Eagles’ defensive end pressured high but was unable to stop the ball from breaking through the middle of the defensive line in the tenth minute of the half.

The Lady Marauders’ first goal was scored by Mallory Dolansky. BG junior Lainey Farabaugh passed her the ball from the right side of the field. The pass led Dolansky to take a few touches to the center of the field and score in the bottom right corner of the net.

Guilfoyle was then able to break through Tyrone’s defensive line again nine minutes later when junior Claire Cammarata placed a long pass over the Tyrone defensive line, which landed in the middle of the field for Farabaugh to take a small touch and score.

But Lady Eagles did not let BG’s lead get to their heads. Tyrone’s defense continued to pressure the ball and held its formation. In the last minute of the half that BG was able to score again, making it 3-0.

Farabaugh dribbled up the right side of the field and made a few moves around the defenders to take a quick shot to the top right corner of the net.

Tyrone came back into the second half with high intensity and looking to score. They quickly took control of the ball and began to connect passes in the midfield. Many shots were taken on the goal but none were able to make it in until the third minute of the second half.

Freshman Lexi Hess dribbled the ball up the right sideline of the field and then made a move around BG’s defender and headed straight towards the goal. Hess was able to shoot in the right corner of the net to score Tyrone’s first goal of the game.

The Lady Marauders then responded and scored again after Farabaugh was able to dribble the ball up the right side of the field.

Senior Sophia Nelson led the Lady Eagles to score two more goals within the half. Nelson’s first goal was scored after a pass from junior Eliza Vance led her to take a shot into the bottom corner of the net.

Senior Jaylee Shuke assisted the second goal after a goal kick landed at Nelson’s feet and she was able to turn towards the goal and take a shot at the net.

Tyrone continued to pressure BG and take several more shots at goal. The Lady Eagles played tough during the second half of the game but were unable to top Bishop Guilfoyle.

The game ended in a 5-3 loss for Tyrone but the team was happy to see how they could come back on the field and continue to put up a fight after trailing 3-0 at halftime.