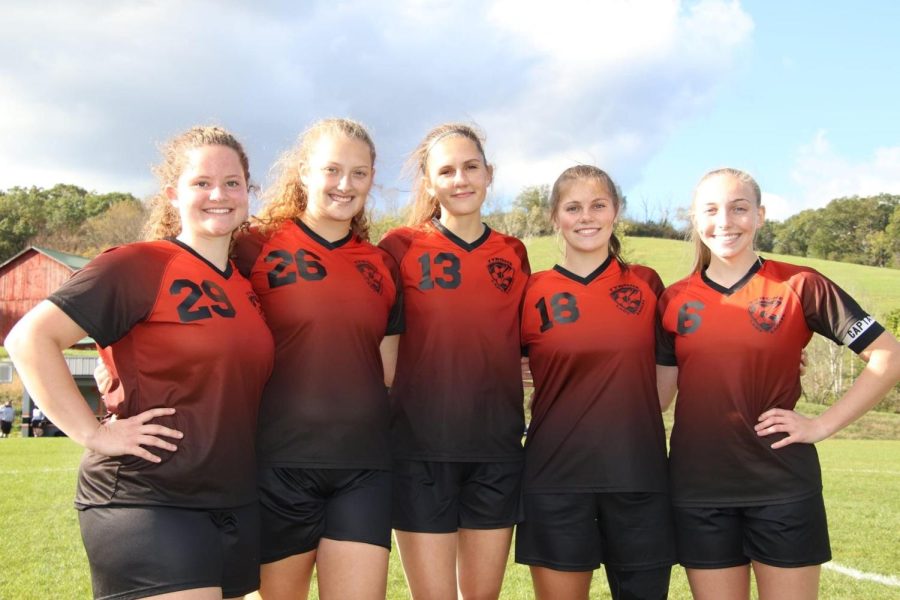 The Tyrone and Bellwood seniors on the Lady Eagles Soccer team.

Although the score may not show it, the team played exceptionally well but were unable to take advantage of all their opportunities. Throughout the game, the Lady Eagles connected several passes but struggled with their first touches when they tried kicking the ball up-field.

“We didn’t get the outcome we wanted but we still put in the effort,” said senior Lindsey Parks.

Tyrone dominated possession of the ball for the majority of the first half and took several shots on goal. Although several shots were taken, Bald Eagle’s keeper remained active and stopped all the shots from passing.

Within the last ten minutes of the half, Tyrone began losing possession of the ball as Bald Eagle intercepted their passes. Bald Eagle took advantage of their possession and headed straight at Tyrone’s net. Bald Eagle’s Hacker was able to split the defenders after a pass from McHenry led her straight towards the middle of the field. Hacker scored and gave Bald Eagle the lead over Tyrone.

Six minutes later, Bald Eagle intercepted another pass intended for a Tyrone midfielder and shot a long shot into the top right corner of the net.

Tyrone was unable to gain possession long enough to take another shot in the time remaining and the half ended in a 2-0 Bald Eagle lead over Tyrone.

Tyrone came back on the field with high intensity and looked to take more shots to tie up the game. Within the first four minutes of the half, a goal was scored by junior Eliza Vance with an assist from sophomore Lainey Quick.

The play began when Quick passed the ball from the right side of the field to Vance, who was running up the center of the field, and Vance took a small touch and then shot in the bottom right corner of the net.

Bald Eagle then put higher pressure on Tyrone and came back into the game hoping to add more goals to the scoreboard. They began dominating possession of the ball and took several shots on goal, with three more going in by the end of the half.

The game ended in a 5-1 loss for Tyrone, but they did not let the score take away from their senior night. Several of the seniors thought they played well throughout the game and season as a whole.

“Throughout the whole season, we have played phenomenal. This has been one of the best seasons in my high school career and I could not be more proud of how far this team has come,” said senior Mackenzie Latchford.

With the Senior Night game being the second to last of the season, the seniors began to think about their time on the team and what they will miss most.