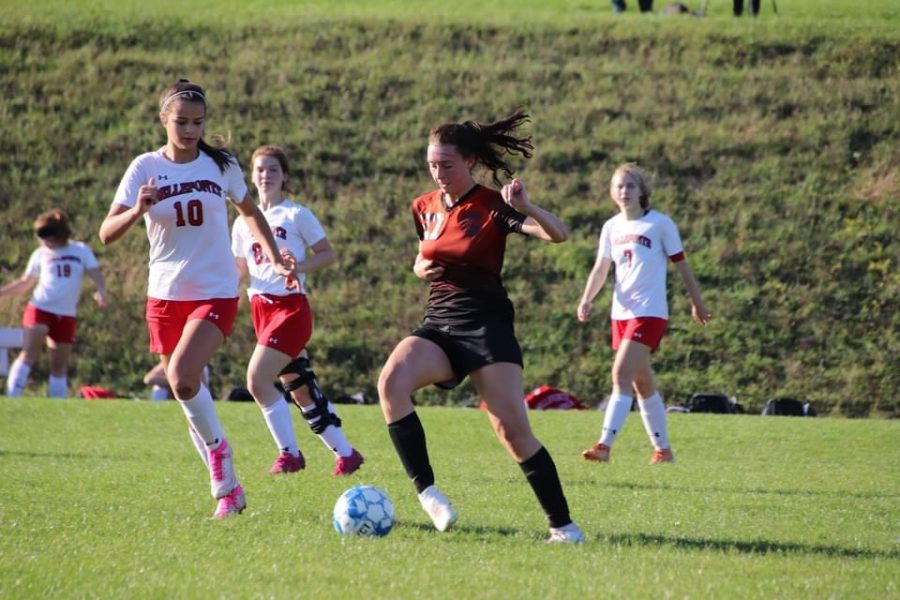 Tyrone came out strong in a high-intensity game against Bellefonte last Wednesday, October 20th, and lost 2-1 after a hard-fought game.

The Lady Eagles played tough and put many shots on goal but were unable to get the extra touch to get the ball across the goal line. Tyrone fought hard and the defensive line pressured high but was unable to catch the through balls that led to their defeat.

In the first half, both teams came out strong with Tyrone holding the majority of possession over the ball. The Lady Eagles connected passes and took a few shots within the first ten minutes of the game but were unable to get the ball to reach the net.

Within the thirteenth minute of the first half, Bellefonte saw an opportunity to score and took advantage of it. A pass was made from the right side of the field to the center where Bellefonte’s Kerri Shutika waited. Shutika then took a touch on the ball before scoring in the top right corner of the net.

Tyrone did not let the goal get to them and continued to connect passes within the mid-field. The team took every opportunity to pass the ball upfield to one of the strikers for shots to be taken on Bellefonte’s net.

Tyrone retaliated ten minutes after the Raider’s goal and put the ball in the back of the net when Tyrone senior Lindsey Parks passed the ball from the mid-field to Bellwood senior Sophia Nelson, who was making a run from the right side of the field. Nelson then got possession of the ball and dribbled to the center of the field where she turned and shot the ball into the right corner of the net.

Both teams continued to play strong in their defensive ends for the remainder of the half and left the half with a 1-1 tie.

Coming back into the game, Tyrone continued to look at the back of the net and took every opportunity to get the lead over Bellefonte. Although Tyrone held most possession during the second half, it was Bellefonte who found the opportunity to score and used it to place one behind the line.

Ten minutes into the second half, Bellefonte was able to score their second goal and take the lead when Shutika gained possession of the ball and dribbled it up the sideline. She was then able to make some moves around Tyrone’s defenders and shoot into the right side of the net.

Tyrone continued to play with high intensity and connected passes, but their shots kept getting blocked by Bellefonte’s keeper. The game ended in a 2-1 loss for Tyrone.

Tyrone will see Bellefonte again when Tyrone plays against them in the district playoffs for the second year in a row. Last year, Tyrone lost to Bellefonte after a nail-biting game that ended in penalty kicks. This year, the Lady Eagles have worked extra hard and put the extra effort into getting prepared for playoffs in hopes of beating Bellefonte and then playing Hollidaysburg for the district title.

The Tyrone vs. Bellefonte playoff game is at 5:30 at the Tiger Stadium in Hollidaysburg on Monday, November 1st.