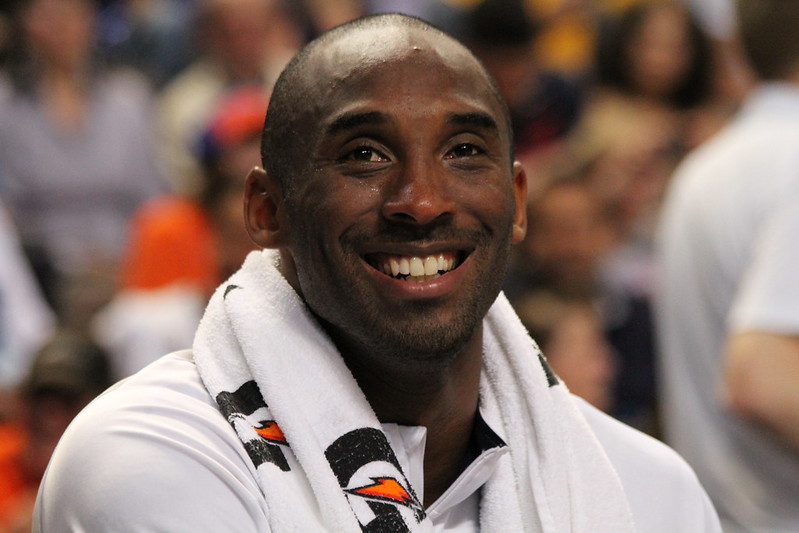 Kobe Bryant on the bench while representing Team USA at the Olympics in 2012.

Yesterday will be a day forever remembered in the sports world. The NBA, along with the rest of the sporting world, lost an icon. They lost a hero, a teammate, but most importantly, they lost a friend when Kobe “Mamba” Bryant died at the age of 41. Bryant, his 13-year-old daughter Gianna, and seven others were killed in a helicopter crash while on their way to a youth basketball game in southern California.

Bryant was an international sports icon with Pennsylvania roots. He grew up in suburban Philadelphia and was a graduate of Lower Merion High School. His death has had an immediate effect on basketball players and fans around the world, and here in Tyrone.

“He was always an idol of hard work and dedication to me. He played the game I grew up loving. His love and passion for the game and life itself were so pure,” said Tyrone senior girls basketball player Linsday Fusco.

NBA teams playing yesterday honored the late legend in different ways. Some held moments of silence. Others, like the Toronto Raptors and the San Antonio Spurs, each took a 24-second shot clock violation to start their game to honor Bryant who wore number 24 for the last part of his career. Mark Cuban, the owner of the Dallas Mavericks, just announced the number 24 will never be worn by a Maverick player again.

“He’s a basketball legend, one of the best to ever play the game,” said TAHS sophomore girls basketball player Jaida Parker.

His death comes the day after he watched LeBron James pass him on the NBA’s all-time scoring list in Bryant’s hometown of Philadelphia.  Kobe finished his historic 20 year NBA career with a packed trophy case. He was an 18-time all-star, an 11-time All-NBA selection, a five-time NBA champion, and a two-time NBA finals MVP.

Kobe was known to be the face of the NBA during the 2000s thanks to three straight NBA titles with Shaquille O’Neal by his side in 2000, 2001, and 2002. Even after Shaq left Los Angeles, Bryant put the city on his back carrying them to two more NBA titles in 2009 and 2010. In 2009 they defeated the Orlando Magic led by a young star named Dwight Howard. In 2010 he defeated the NBAs first super team in the Boston Celtics whose core consisted of Kevin Garnett, Paul Pierce, Ray Allen, and Rajon Rondo.

“He was always the face of the NBA and everyone’s dream that plays basketball to get to where he was. He is the one who changed the game from old school to modern-day basketball. Nobody would ever attempt to do the stuff he would. Nobody will ever play the way he does even though everyone wishes they could. He will always be a true legend,” said junior Tyrone boys basketball player Damon Gripp.

Kobe’s talents went way beyond his athletic ability. Bryant had one of the best mentalities in the history of sports. As soon as Bryant stepped on the court he was a different man.  He was a man of zero fears.

Kobe never sat out a game for the “load management,” a term used in today’s game that means giving players rest during the long 82 game season.

Kobe’s mindset was if he could walk, he would be playing.

Bryant tore his Achilles tendon in a game against the Warriors in 2013. After the injury, he got up and shot his free throws before finally coming out of the game. Bryant went through rigorous rehab after his injury and played three more seasons at a very high level.

Whether he was wearing #8 or #24 the name Kobe Bryant will burn in the memories of past players, players who had the honor of being his teammate, and the youth who grew up wanting to be just like him. Kids yelling “Kobe” as they throw a wad of paper away in school, or baseballs back into buckets at practice, are part of his enduring legacy and impact on youth everywhere.

The NBA will mourn the loss of one of the greatest players to ever lace up and play the game. Before this NBA season comes to a close the numbers 8 and 24 should hang from the rafters of every NBA team.