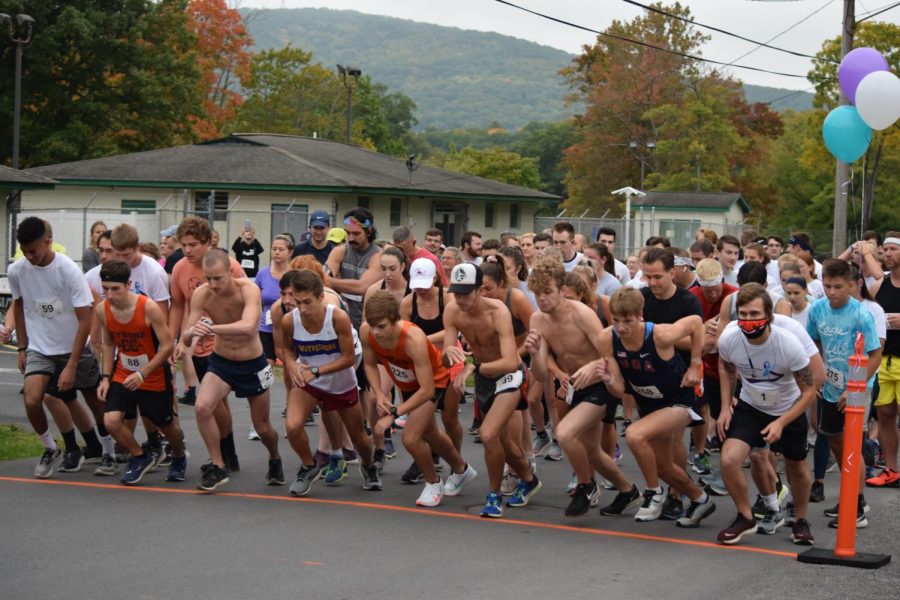 The inaugural Adam Zook Memorial 5K Run/2K Walk at Reservoir Park in Tyrone on Saturday, September 26 raised over $9,000 for scholarships and suicide prevention in the Tyrone area.

Race organizer Melissa Kohler was thrilled with the turnout, especially considering that the race had to be rescheduled twice due to COVID-19.

“I was truly blown away by the community support for the event. It exceeded all my expectations, especially with the pandemic,” Kohler said.

According to Kohler, there were 337 registered participants and 50 volunteers.

“When the world around us is often so focused on the negative, to see our community come together as they did on Saturday reaffirmed my belief in the power of a community, not just to raise funds but to show support for Adams family and openly address sensitive topics like mental health and suicide prevention. To show those who are struggling with something in their lives that they don’t have to do so alone,” Kohler said.

The event was created in memory of Tyrone High School alum Adam Zook, who took his own life last August.

Adam was a 2016 Tyrone graduate, where he was a popular student, excelling academically and athletically. He was very involved in the school community as Editor-in-Chief of the Eagle Eye, a member of the mock trial team, drama club, choir, and numerous other clubs and organizations at Tyrone High School.

Adam was well known as a compassionate and caring person who touched many lives in both the Tyrone and Slippery Rock community.

Adam’s older brother Hayden shared a story before the race that summed up his brother’s deep compassion and concern for others:

“[Adam] was so competitive, he wanted to do the best that he could do. But before every race, [Adam] would look to his left and look to his right and wish every competitor the best of luck. He wanted people to know that he cared about them and that we are all in this together,” Hayden Zook said.

Hayden also asked everyone in attendance to let the people in their lives know that they are not alone, to raise awareness of suicide prevention, and to always lend a caring hand.

“Be kind to others, you never know when they may need that hello,” as Adam himself said.

At the awards ceremony, the first two Adam Zook Memorial Scholarship winners from the Tyrone class of 2020 were recognized.  They are Brianna Foy, who is attending the University of Pitt Bradford, and Matthew Savino, who is attending Penn State Altoona.

With the first successful year in the history book, race organizers are already planning for next year.

“We want to continue to grow and be able to have the pancake breakfast we were planning on having before the coronavirus and open up booths,” Tyrone cross country coach and race organizer Tammy Wills said.

All proceeds will be invested into a scholarship fund for two Tyrone senior runners on the track or cross country team who demonstrate the same leadership, work ethic, sportsmanship, and positive attitude that Adam brought to the teams.

“As our fund grows we hope to expand the scholarships to recognize more TAHS students who make positive contributions to the school community,” said Kohler.

The winners were as follows: