Students in Mr. Dan Plummer's carpentry classes are learning the building trade from the ground up 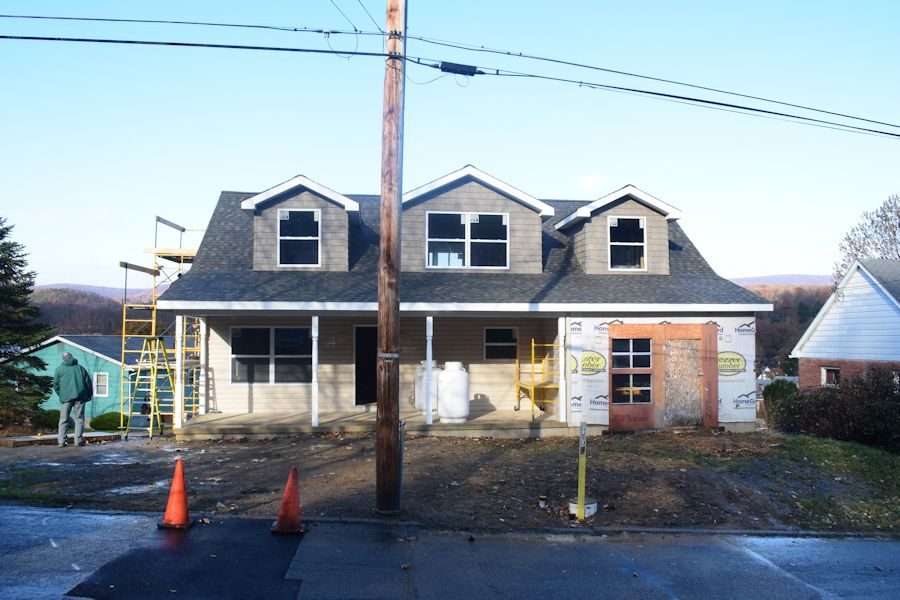 The carpentry students and teacher Dan Plummer have been making good progress on the TAHS house project this fall.

This is the fourth year of construction and the students plan on getting a lot done. So far this fall, the class has focused on the exterior of the house and the siding.

“The project has been going well. We are on track and the students have been working and learning well. We hope to have all the drywall hung inside throughout the structure, and have the exterior finish complete by the end of the school year,” said carpentry teacher and project director Dan Plummer.

There are approximately 25 students working on the project and the classes have been going to the house almost every day since the beginning of the school year.  There are ten seniors who work during second and third periods, and about fifteen juniors who arrive for their fourth-period class.

Recently the students installed stairs from the top deck to ground level by the basement door. The stairs go down from the back porch and then hit a landing and come back towards the house.

“The toughest part of the stairs was definitely digging the holes.  We did it all by hand.  The holes kept collapsing and filling with water and we had bail them out with buckets several times.  It took us about two weeks to get all the holes dug,” said senior Hunter Anderson.

Plummer hopes to get the fascia completed this fall before moving inside the house. Most of the exterior will be sided and completed before Christmas break.

Another group of students is working on J-channel which is used as trim around windows, doors and where the siding meets a soffit or roof at an angle.

“Working on the J- channel isn’t too hard, you just have to leave an inch on each side of your cut so your pieces overlap, and it helps if you’ve got a good pair of snips to cut your angle,” said senior Codi McFarland.

Inside projects will be done during the winter when it’s too cold to work on the exterior.  Winter projects will include electrical work as well as plumbing.

“We’ve already run some wire for electrical and it’s pretty easy. It is hard to gauge how much you need to cover just a little distance though. We had to cut the same wire three times because we were cutting it too short. After that screw-up, we learned to add a few feet to our measurement and haven’t had a problem since,” said Hunter Anderson.

This year is probably the last full year that will be spent on the house project.  Plummer is hoping to complete the project next school year.

“This continues to be a great opportunity for the students. I’m pleased that this school district and community continues to support this program,” said Plummer.

When finished, the property will go up for sale to the public.