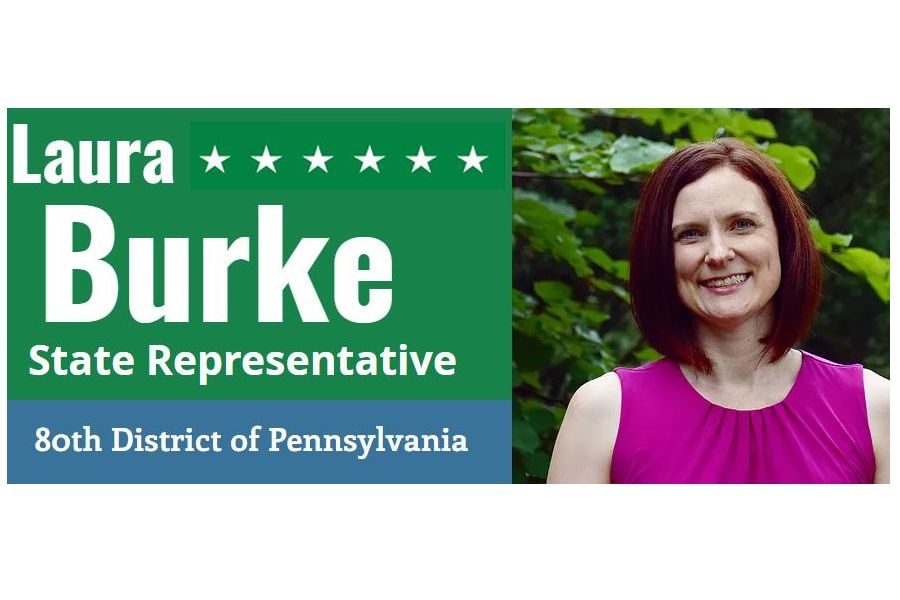 Burke, who is orignally from Washington state, graduated from the University of Richmond with a degree in political science in 2002 and earned her law degree from Washington University School of Law. Burke met her husband, Sean, a Hollidaysburg native, while at law school. The Burkes moved back to the area in 2005 where Mr. Burke is employed by the law firm McQuaide Blasko.

After moving to Hollidaysburg, Burke served as a law clerk to the Honorable Elizabeth A. Doyle, President Judge of Blair County. She then spent five years at the law firm McIntyre, Hartye, Schmitt, and Sosnowski where she has represented local doctors and community hospitals in medical malpractice cases in addition to defending individuals in car accident and premises liability cases.  Most recently she helped establish the FSI Justice Project which is a civil legal representation clinic that provides free legal services to low-income victims of domestic abuse in Blair County.  She recently resigned from that job in order to focus on her campaign and her family.

“I decided to run [for the PA House] in order to give the citizens of the 80th a meaningful choice as to who represents them and to work for positive change for our community,” said Burke, “I am a problem solver who is going to offer real solutions to our issues. I am not going to just talk about what is wrong, I am going to take action to make life better here in Blair County.”

According to Burke, the two most important issues in this election are the economy and the opioid crisis.

With respect to the economy, Burke said, “we have a really high quality of life, but wages tend to be lower than other areas. Other candidates talk about how to keep our kids here.  I’m not worried about that.  As the spouse of a “boomeranger,” someone who left for school and then came back to start their career and raise a family, I know that there are opportunities here and a lot of good reasons for young people to make this their home.”

“We can’t expect all students to take on incredible amounts of student loan debt just to get a job. We can raise wages. We can diversify our economy by encouraging the development of new industries such as renewable energy so that new types of jobs are available.  We can also encourage students to pursue vocational careers or careers they can begin after community college as opposed to a four-year degree,” said Burke.

On the topic of the opioid crisis, Burke believes that there is a lot more the state government should be doing to combat the problem.

“It is a really complex problem that is going to take some time to improve and we will need to do multiple things to fight it. A few things I have proposed are increasing funding and availability of mental health services and coordinating mental health services for individuals leaving jail so that they have continuity with the services they received while they were incarcerated once they get out. Efforts have already begun to amend our Family Law statutes to provide grandparents caring for their grandchildren legal status as caregivers in cases where parents are battling addiction which will help the family members.  Finding ways to address the root causes of addiction and prevent people from becoming addicted in the first place is always going to be a better solution than trying to pick up the pieces afterward so I will encourage education and prevention programs.

If elected, Burke pledges to be an advocate for family-friendly policies, including supporting funding for education, an increase in the minimum wage, and expanding family leave and policies that are good for workers and working mothers.  She would also like the state to make healthcare more affordable and accessible to all.

Burke also strongly encourages bipartisanship and pledges that she will work with Republicans if elected.

“The inability of our current legislators to work together effectively is what has gotten us into the mess we are in,” said Burke, “Being able to work with people who have different views from you is an essential part of being an effective leader. Being a good representative is not about adhering strictly to your personal views. It is about doing what is best for the majority of people in your district.”

Burke says that her experience in both negotiation and mediation that will serve her well in Harrisburg. She is also accustomed to being in the minority, having grown up as a Republican in Washington State, which tends to be more liberal.

“Compromise is very important in order to keep our state moving forward and I am willing to compromise to some extent on most issues,” Burke said.

On the topic of school safety, Burke says “we do not have a school security problem, we have a gun safety problem. We are not doing enough to keep kids safe. The majority of gun-related injuries do not occur at school. According to a study in Pediatrics, less than 1% of children who died of gunshot wounds between 2003 and 2013 were shot at school. I have proposed mandatory gun safety lessons be taught in public schools at a young age so that children know the risks of playing with guns, what to do if they find a gun and basic gun safety.  Parents will be educated through their children to store guns and ammunition safely in a way similar to what we do now with fire safety. We need to educate parents on how to talk to their children about guns and demystify them so that when they find them they know it is not safe to play with them.”

“I want to encourage more people to be active citizens, to register to vote as soon as they turn 18, and to educate themselves on what the candidates truly stand for. Decisions are being made now that will affect you as you become adults.  Please think about whether those decisions are being made in your best interests,” said Burke.