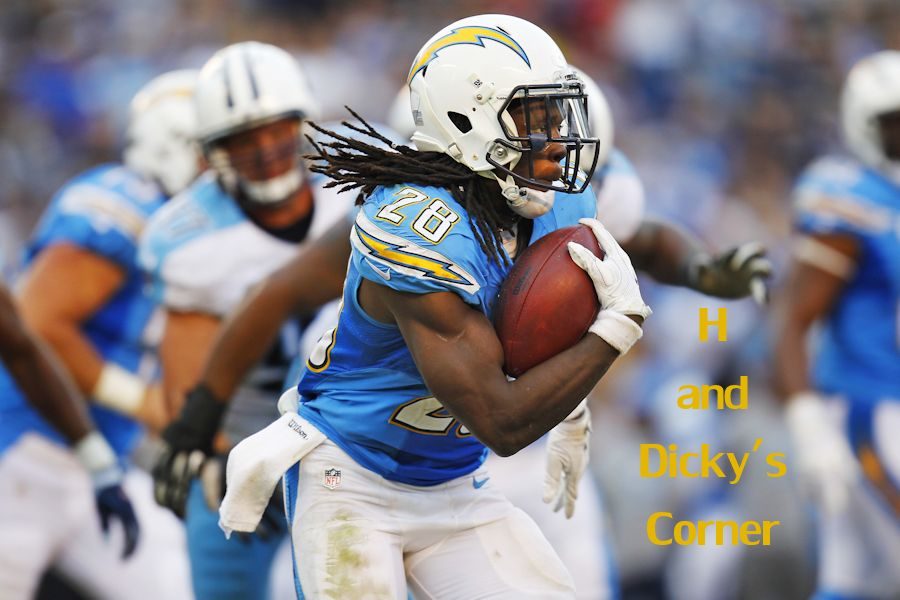 By Hunter Anderson and Noel Politza

Tom Brady-QB, NE — Oakland’s defense has been very lackluster this year, and on the contrary, Tom Brady has shown that he truly is the GOAT. Brady will look to add another W to their season, and put up very good fantasy numbers as well.

Melvin Gordon-RB, LAC — Gordon scored just 4.2 points last week, so you best believe he’ll be in store for a major bounce back week. Given Gordon’s raw talent, he could go off on any defense, any week. We think that will be this week against the Bills.

Antonio Brown-WR, Pit — Antonio Brown is maybe the best WR in the NFL, and the Steelers are playing the Tennessee Titans this week. Although it may be a good game, both offenses will most likely be high-scoring. Prepare for Brown to benefit from that.

Travis Kelce-TE, KC — Despite Kansas City’s struggles of late, Travis Kelce is still Alex Smith’s number 1 target. He gets way too many targets and is way too athletic not to consider him a TE1.

Jared Goff-QB, LAR — It seems that after a rookie season where Goff struggled, he is proving to everyone why he was selected 1st overall in the 2016 NFL Draft. He has plenty of options to turn to come Sunday. He’ll utilize Cooper Kupp, Robert Woods, and Sammy Watkins to rack up yardage, as well as turn to Todd Gurley for checkdowns. Gurley also poses a huge threat to the ground game which will keep the Vikings’ defense honest and open up play action for Goff.

Tevin Coleman-RB, Atl — The versatile backup to Devonta Freeman will be getting the majority of touches on Sunday due to Freeman’s concussion. Coleman is possibly the best backup in the league and would definitely start on any other team. We expect big numbers out of Coleman this week.

DeVante Parker-WR, Mia — When healthy, the young and talented receiver is very dangerous. This week the Dolphins square up against the Buccaneers who have a weak secondary. Seeing that Bucs’ cornerback Brent Grimes will be matched up against Jarvis Landry for most of the game, DeVante Parker will look to feast on whoever the Bucs match him up with. Parker is a definite start for this week.

Jared Cook-TE, Oak — Derek Carr has been finding the 6’5” tight end quite a bit these past few weeks, which has led to pretty consistent numbers by Cook. Jared Cook hasn’t produced a touchdown since week 3 so it’s only a matter of time before Carr finds him in the endzone, and it will most likely be this week.

Drew Brees-QB, NO — We are seeing a very version of Drew Brees this season. Fantasy owners are used to seeing Brees put up 20-30 point games each week and throwing for 300 yards and around three touchdowns. This year, the Saints have been relying on the run game more often than they used to, and it has been very effective. Brees will continue to lead his team to victories each week, but will see a drop in both yardage and passing touchdowns.

DeMarco Murray-RB, Ten — Murray is still a solid option normally, but against the Steelers strangling run defense, he’ll have trouble doing much. His counterpart, Derrick Henry, could end up getting more touches than him because of his youth and power.

Stefon Diggs-WR, Min — Diggs suits up against the Rams, who are currently rolling off a 4-game winning streak. Their overall defense is one of the best in the NFL, and when considering Diggs’ inconsistency, it will most likely continue.

Jordan Reed-TE, Wsh — Jordan Reed is always bothered by some sort of injury. If you own Reed, try your chances with another TE. Even when he’s healthy, the Redskins offense doesn’t know how to use him. Stay away from Reed until he shows he can light it up like he should.

Philip Rivers — Rivers is listed as questionable with a concussion.

Leonard Fournette, Isaiah Crowell, and Ty Montgomery — All three stud running backs are listed as questionable for this week.

Devonta Freeman — Freeman suffered a concussion in week 10 that will likely cause him to miss the Falcons game this Monday.

Doug Baldwin, Dez Bryant, Alshon Jeffery — These receivers who are at the top of each of their team’s depth chart are listed as questionable.

Will Fuller V — Fuller is listed as doubtful for this week with a rib injury.